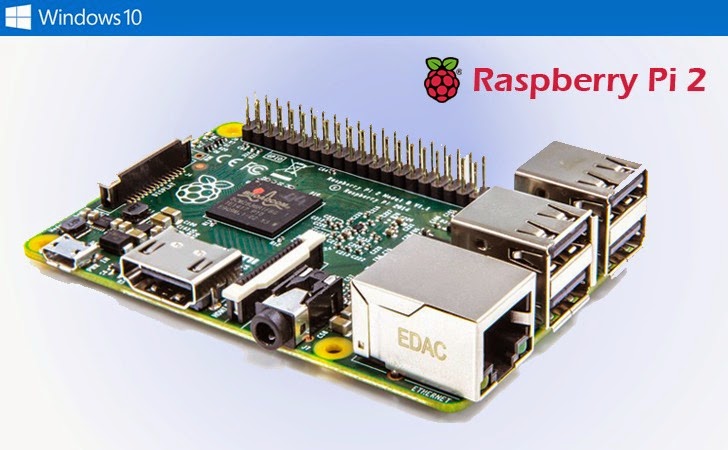 Earlier today, when Raspberry Pi Foundation unveiled the second avatar of its mini computer, the tech giant Microsoft revealed that Windows 10 operating system will support the Raspberry Pi 2 for the development of smart devices and appliances.

Really a great news for all Micro-computing fans – a new, powerful Raspberry Pi 2 Model B in town. However, Microsoft added another reason to celebrate it – the new model of Raspberry Pi 2 runs Windows 10.

The all-new and powerful version of Raspberry Pi 2 brings a host of new hardware, including a Broadcom 900MHz quad-core ARM Cortex-A7 processor and 1GB of RAM. Raspberry Pi Foundation says that these upgrades make the Pi 2 Model B a much more powerful computer which costs $35 only.

Raspberry Pi 2 have six times the processing power of Model B+. Also, its quad-core chip and twice the amount of main memory will support more intensive processing tasks, which means the device can do almost everything a normal PC can, such as Word processing, Web surfing, among other tasks.

The Raspberry Pi is an extremely simple computer that looks and feels very basic, but could be built into a number of geeky projects. Because of low-cost appeal of the Raspberry Pi, the nonprofit Raspberry Pi Foundation has sold 4.5 million units.

In its blog announcing the Raspberry Pi 2, the organization says it's been working closely with Microsoft for the last six months to bring the forthcoming Windows 10 to the new Raspberry Pi 2.

"Because it has an ARMv7 processor, it can run the full range of ARM GNU/Linux distributions, including Snappy Ubuntu Core, as well as Microsoft Windows 10," said Raspberry Pi creator Eben Upton.

Microsoft's Windows 10 operating system is expected to launch this summer, and is designed to work across mobile and desktop as well. But What's more? The new OS is being pitched at tablets, Xbox, hybrids, and the fast-emerging "Internet of Things."

The Raspberry Pi 2-compatible version of Windows 10 operating system will be freely available to the "makers" community later this year via the Windows Developer Program for IoT (Internet of Things), an initiative that the company started rolling out last July.

It's still unclear whether the version of Windows 10 will be any lighter than other installs, but Microsoft says it will share more details soon.

"We are excited about our work with the Raspberry Pi Foundation and to share that Windows 10 will support Raspberry Pi 2," wrote Kevin Dallas, General Manager of Windows IoT Group, Microsoft. "We will be sharing more details about our Windows 10 plans for IoT in the coming months."

So far, Raspberry Pi Foundation has supported a handful of operating systems, including Linux, and now it will support Windows.