Edward Snowden at SXSW Conference: Would I do this again?, I Would! 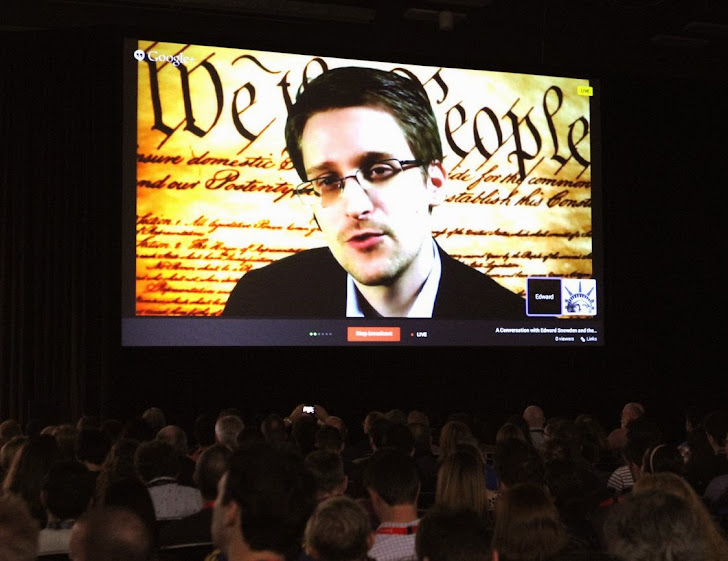 In an interview, speaking via Google Hangout at the South by Southwest Interactive conference, SXSW in Austin, Snowden said he has no regrets over his leaks about mass surveillance programs, despite now being unable to return to the US, where he faces a criminal indictment.

He said, "Every society has benefited" from the disclosures. "Would I do this again? The answer is absolutely yes. Regardless of what happens to me, this is something we had a right to know."

Two BAD-Geeks: Snowden criticized both Alexander and Michael Hayden, who were his predecessor as the NSA director, and the same two officials who mainly "harmed our Internet security and actually our national security" in the era since the September 11 terrorist attacks by "elevating offensive operations" over cyber-defence.

"When you are the one country in the world that has a vault that is more full than everyone else's, it doesn't make any sense to be attacking all day and never defending your vault," he said, adding, "And it makes even less sense when you let the standards for vaults worldwide have a big back door that anyone can walk in."

Not in LOVE with Russia or China: Snowden rejected the claims that the NSA secret document he is having is provided to the potential rivals of the US, such as Russia and China.

"That has never happened, and it is never going to happen. If suddenly the Chinese government knew everything the NSA was doing, we would notice the difference," said Snowden.

Ask NSA, 'Who Are the Terrorists?': The young man also insights an issue of the Nation's importance. He claimed that by being busy in monitoring and intercepting everyone's communication, the US security agencies failed to identify suspect's locomotion.

He cited some examples, such as Tamerlan Tsarnaev, one of the brothers alleged to have bombed last year's Boston Marathon and Umar Farouk Abdulmutallab, the so-called "underwear bomber" who attempted to blow up a plane bound for Detroit on Christmas Day 2009. In both the cases, The US failed to catch them despite several opportunities.

"We are monitoring everyone's communications rather than suspects' communications," he said. "If we hadn't spent so much on mass surveillance, if we had followed traditional patterns, we might have caught him."

NSA Encouraging others to PLAY 'SPY-SPY': The mass surveillance carried out by the US intelligence agency, the so-called 'National Security Agency' (NSA), is encouraging the other countries to conduct the similar program of their own to carry out surveillance over the citizens of their countries and endangering the privacy and security of every individual.
"If we don't resolve these issues, if we allow the NSA to continue unrestrained, every other government will accept that as a green light to continue, and that is not what we want," he said.


"They're setting fire to the future of the Internet," said Snowden of the National Security Agency. "We need public advocates. We need public oversight. Some way [to have] trusted figures, sort of civil rights champions to advocate for us, to protect the structure. How do we fix our oversight? How do we structure an oversight model that works? The key factor is accountability."

Suggestions for Facebook and Google: Snowden advises the technology firms, whom users trust and rely upon such as the popular social networking site, 'Facebook' and the worldwide used search engine, 'Google', to collect the data of their users until it is needed, but not to store it.

"The technology firms such as Facebook and Google can't collect any data but rather that they should only collect the data, and hold it as long is necessary, for the operation of your business," he said.

SNOWDEN, "Encrypt Everything": He advised every individual, who is sitting online and are using various services on the Internet provided by the various technology firms, to encrypt their hard drives and their online activities, and to use the services which are providing encrypted form of communication, i.e., an end-to-end encryption.

"By doing end-to-end encryption, you force global passive adversaries to go after the end points and the individual computers," Snowden said. "The result of that is a more constitutional and carefully overseen intelligence-gathering model."

He described encryption as "the defence against the dark arts in the digital realm," sitting in front of a green screen projecting the image of the US Constitution sat a Google Hangout projection, which came live via "seven proxies" to ensured that no one will know exactly where he is. He also advises people to browse the web anonymously using the Tor system.

He warned, "If you are a target of the NSA, it is game over no matter what unless you are taking really technical steps to protect yourself."

Need Accountability: According to Snowden, since there is no accountability in the federal government for organizations like the NSA, there is a great need of 'a group of trusted public representatives and civil rights officials' that oversees government regulation.

"We need a watchdog that watches Congress," and calls them out on the lies, he said. "Which then begs the question: Who watches the watchmen?"

At the end of his interview, the audience was on its feet to deliver a standing ovation. Regardless of people supports Snowden's disclosure or not, his disclosure has brought an improvement in the Internet security and had aware each individual to protect themselves from the threats conducted by various cyber criminals or the government organizations.