Syrian Electronic Army's own website got hacked by Turkish hacker

Oops.. Hackers got Hacked! The Syrian Electronic Army, who has hacked hundreds of High Profile targets in 2013-14, today they got hacked by a Turkish hacker.

Turkguvenligi, a Turkish hacker told The Hacker News that he hacked and defaced the official website of the hacking group SEA (sea.sy and leaks.sea.sy).
SEA Group has taken down many serious targets like Microsoft, Obama & New York Times' twitter accounts & websites in the past, but today their own server got breached.
The most common hacking technique used by the SEA Group is Phishing, but the Turkguvenligi hacked then using an exploit known for vulnerabilities in the server or website.
At the time of writing this news, the whole website of SEA was down, but our readers can see the defacement mirror on Zone-H.
Turkguvenligi tagged SEA in a tweet, says "hi guys, you have been hacked": 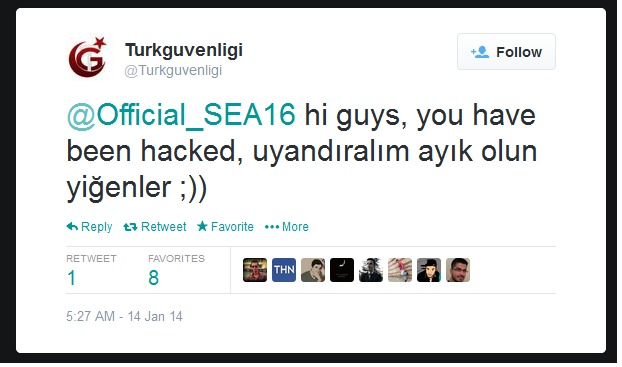 The Syrian Electronic Army group has not commented anything about the hack, but We'll keep you updated, so stay tuned.

Update: Turkguvenligi told us that he also hacked into some of the SEA's personal websites, hosted on the same server and managed to successfully gain the access to hosting panel, which gave them access to RAID device also.


The hosting company that hosts #SEA websites, including (https://leaks.sea.sy) was attacked... (sea.sy) was not affected. Since the #SEA servers is managed by the hosting company, they down the servers quickly to make sure that will not happen again. Such attacks will not affect the #SEA, we will continue our hacks and operations.