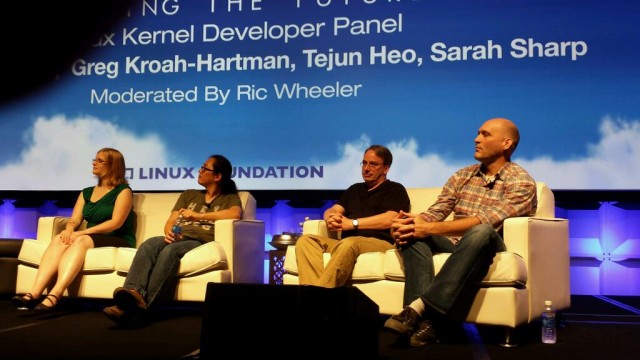 At the Linuxcon conference in New Orleans today, Linus Torvalds and the other top Linux developers, talked to the Linux faithful about Linux, Microsoft, and other issues.

During a question-and-answer ‪session ‬at ‪the LinuxCon, Linux Torvalds admitted to questions from the audience that the U.S. Government approached him to put a backdoor into his open-source operating system. Torvalds responded "no" while shaking his head "yes," as the audience broke into spontaneous laughter.

Then someone asked if Linus would be interested in becoming Microsoft's CEO, which was answered with a big smile and because he is fully satisfied with the development of Linux and his life.

He noted that when he started Linux 22 years ago, the hardware was very different than it is today. He expects that 20 years from now the hardware will change even more.

"Linux usage keeps changing. Linux today is very different from even ten years ago," Torvalds added. "I hope it will continue to meet new use cases."

During the session, Torvalds also explained why he became a developer in the first place. He said that when he started, he didn't have money to run Unix on his own machine. He also noted that his friends were playing games on their computers that he couldn't afford, so he had to learn to program. "Necessity made me try to do something," Torvalds said.

Update (11:07 AM Friday, September 27, 2013 (GMT): Today Linus told the media that the Government Never Asked him for a Backdoor in Linux. He said , that was a simple joke, which was taken so seriously and goes viral on Twitter.

"Oh, Christ. It was obviously a joke, no government agency has ever asked me for a backdoor in Linux," Torvalds told Mashable via email.