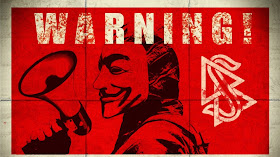 A YouTube video posted by a group calling themselves Anonymous is getting a lot of attention online, claims to have outed two men who allegedly tried to lure underaged girls over the internet.

In a video posted on Friday, a member of Anonymous describes a sting operation in which two Edmonton-area men were allegedly caught trying to meet up with 13- and 14-year-old girls for sex.
Bob Andrews, the head of ALERT's Integrated Child Exploitation unit in Edmonton. "I think it's really important to let the police do their jobs, and not judge someone in a public forum."

Hacker also claims that they contacted Edmonton police about one meeting that was supposed to take place at West Edmonton Mall, but that police did nothing. "There has been no reply. This is unacceptable. Together, we must act, and we must act swiftly to protect our children. For your benefit, we will begin to reveal the identities of the people that were identified," the video states.
The video detailed the name, employer and video of one man, and a name, employer and pictures of another. Police will now be looking at how this video may have impacted any of their ongoing investigations.

Last October, the group released the name and personal information of a man it claimed was behind the death of Port Coquitlam teen Amanda Todd.