Google bans Facebook and other self updating Android apps 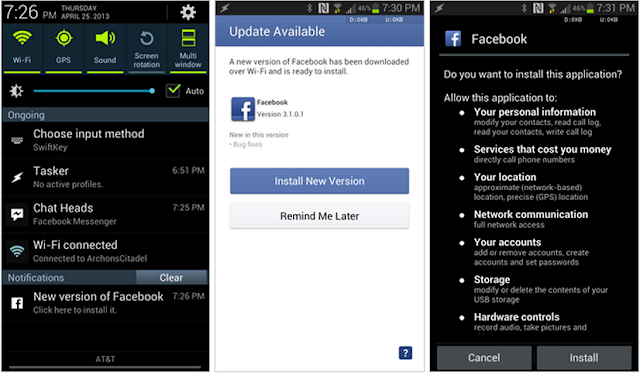 Google just released a new Play Store version 4.0.27 that, contains only very minor tweaks and Google has changed the rules of its Google Play Store to put an end to the practice of developers updating their apps through their own means rather than the official Google Play channel.

Shortly before the Facebook Home launch, some users noticed a new version of Facebook was available on their device, but it wasn't through the Play Store. Instead, the update came directly through the app, bypassing the Store altogether.

Under the "Dangerous Products" section of the Google Play developer policies, Google now states that "an app downloaded from Google Play may not modify, replace or update its own APK binary code using any method other than Google Play's update mechanism."

Essentially this means that once an app is downloaded by an Android user it cannot contact home base and auto-update its own operating code. Instead, it has to use the official Google approved channel.

Google says that its Play store is "trusted source for Android application downloads" and that it is "committed to providing a secure and consistent experience." Allowing apps to update themselves could possibly lead to some less-than-secure scenarios as the initial download from Google Play would be safe while the in-app updater installs malware.