Julian Assange - The most Fuckable Man on the Planet

Aug 19, 2012Mohit Kumar
Julian Assange made a speech today from the balcony of the Ecuadorian Embassy in London and I felt a primal urge brought on by the fact that this man, in all his manly glory, has stuck his proverbial neck out for the essence of life. Truth and Justice. He is a handsome and articulate man, fighting for the basic rights of every human being on the planet. What could be more sexy? Putting aside husbands, lovers, friends, and professional media, he can Wik my Leaks anytime he wants.
Julian started by reminding us that he is there because he can't be elsewhere. He blended his thanks for Ecuador's stand for justice with the announcement of an emergency meeting of Latin American countries next Friday specifically to address his situation and to defend the right of asylum.
He made a straight forward statement that the United States must return to the values it was founded on and "Obama must do the right thing." Bradley Manning must be released and "he is a hero and example to all of us….." He gave us a grim reminder that Bradley Manning has been held for 815 days and by law you can only be held 120 days without a trial.
Julian ended his short speech with the statement, "There is unity in oppression. There must be unity in response." 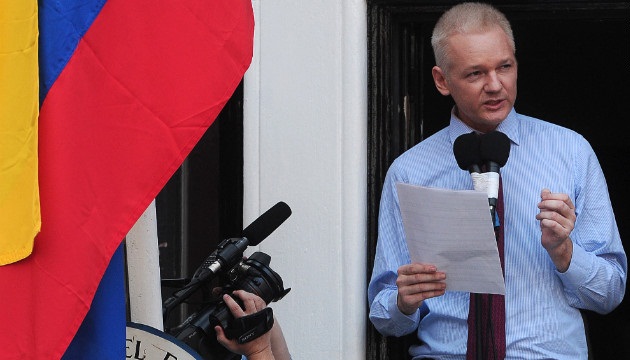 That said, we need a "pussy riot" of the colossal type. It is time for all you Princesses and Queens of revolution to step up and take the reigns and show Obama and David Cameron that women live true to the old adage, "hell has no fury like a woman scorned." And, scorned we have been. The entire planet has been scorned and it is time to show more fury than has ever been displayed that we, want and deserve, the truth.
Women, with all their motherly graces can and should do what we do best. Raise up our voices, heat up the keyboards, and let the world know we have had enough and we are taking control. Let Julian Assange go to Ecuador peacefully and rightfully. Leave him alone to live his life and continue to protect us through the simple act of providing the truth.
Man or woman, you can't really live without the truth. Your government is obligated to inform you and support you in a healthy and violence free life. We have had enough of secrets, lies and false flags. We have had enough of war and economic strife. It is time ladies (and gentlemen) to take back our Mother Earth.
Here are the emails to Obama, Cameron and the President of Ecuador. Write them now, and tell them Ann Smith sent you. I'll write too, after my cold shower.
The goal is justice, the method is transparency. It's important not to confuse the goal and the method.
Written By : Ann Smith (Executive Editor) is the irreverent Executive Editor of The Hacker News, you can reach her at: https://www.facebook.com/ann.smith.92102 or ann@thehackernews.com