Aug 22, 2012Mohit Kumar
The Windows version of Crisis, a piece of malware discovered in July, is capable of infecting VMware virtual machine images, Windows Mobile devices and removable USB drives, according to researchers from antivirus vendor Symantec.The installer was actually a Java archive (JAR) file which had been digitally signed by VeriSign.
Crisis is distributed via social engineering attacks that trick users into running a malicious Java applet. The applet identifies the user's OS, Windows or Mac OS X and executes the corresponding installer.
"The threat uses three methods to spread itself: one is to copy itself and an autorun.inf file to a removable disk drive, another is to sneak onto a VMware virtual machine, and the final method is to drop modules onto a Windows Mobile device," Symantec explained in a blog post. 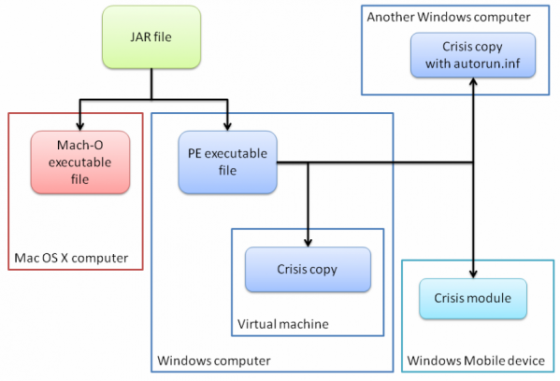