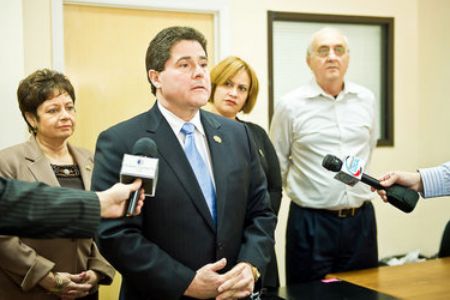 The FBI last week arrested the mayor of the northern New Jersey town of West New York, together with his son, on charges of hacking into a website and a related email account that called for the mayor's recall. Felix Roque, 55, the mayor of West New York, N.J., was arrested with his son, Joseph Roque, 22. They were released on $100,000 personal bond after neither entered a plea.

According to the criminal complaint filed against Felix Roque and his son, on 2 February 2012 the two men began to conspire to hack into and disable a website called www.recallroque.com.
Joseph Roque then allegedly performed a password reset for the Go Daddy account used to administer recallroque.com. This allowed him to cancel the domain name and effectively disable the website, the FBI agent said in the affidavit.
The conspiracy and unauthorised computer access charges each carry a maximum possible sentence of five years in prison and a fine of up to US$250,000. The charge of causing damage to protected computers is punishable by one year in prison and a fine of up to $250,000.