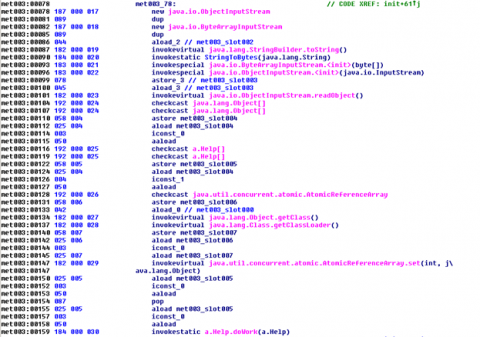 A widely disseminated exploit kit popular with hackers has been updated to take advantage of a recently discovered Java vulnerability. Researchers at Microsoft reported last week that it had observed this vulnerability being exploited in the wild. The Java exploit allows attackers to bypass the Java Runtime Environment's sandbox platform to install malicious code remotely.
The malicious Java applet is loaded from an obfuscated HTML file. The Java applet contains two Java class files one Java class file triggers the vulnerability and the other one is a loader class used for loading.

Named CVE-20120-0507, the flaw essentially allows hackers to bypass the Java sandbox, which is a mechanism designed to blunt attacks from malicious code. For its part, the BlackHole exploit kit, available underground, allows users armed with only basic computer knowledge to set up malicious websites to target vulnerable computers through the web browser.
Statistics from vulnerability management firm Rapid7 tell a similar story based on its analysis of the Java patching habits of Internet users. According to the company, the first month after a Java patch is released the fix is deployed by less than 10 percent. After two months, the number jumps to approximately 20 percent. The highest patch rate for Java last year was 38 percent, which represented the percentage who applied the Java Version 6 Update 26 within three months of its release.
According to software giant Oracle, Java is deployed across more than 3 billion systems worldwide. But the truth is that many people who have this powerful program installed simply do not need it, or only need it for very specific uses. I've repeatedly encouraged readers to uninstall this program, not only because of the constant updating it requires, but also because there seem to be a never-ending supply of new exploits available for recently-patched or undocumented vulnerabilities in the program.