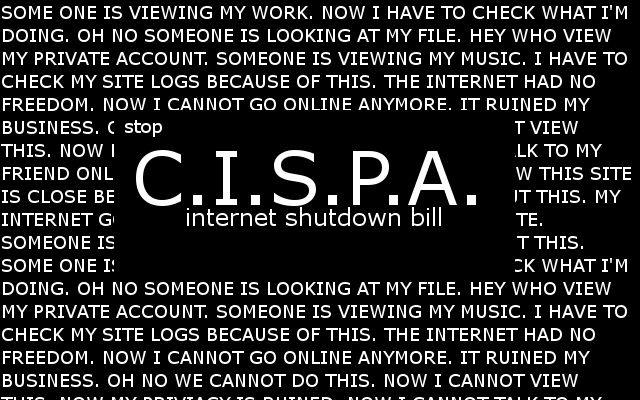 The Cyber Intelligence Sharing and Protection Act (CISPA) H.R. 3532 is a new bill being introduced in Congress that is gunning to blast the ongoing cyber attacks that have occurred since internet users figured out the keyboard could be an effective weapon. If passed through Congress, the bill would allow the government access to personal correspondence of any person of their choosing. Once again, we are being fucked by those nosey neighbors in our government.
You should be very mad and very afraid because CISPA is far worse than SOPA and PIPA in its effects on the internet. The wording of this bill is mumbo jumbo, vague and broad. Reading through the nonsense, basically the act would allow Congress to circumvent existing exemptions to online privacy laws, and would allow the monitoring and censorship of any user of the internet. Peeping Toms will be wetting their pants. The real kicker (in our asses) is that it will also allow the government to stop online communications which they deem critical or disruptive to them. They can even decide they don't like what you say about other private parties and shut you down.
The Center for Democracy and Technology states that CISPA would allow Internet Service Providers (ISPs) to "funnel private communications and related information back to the government without adequate privacy protections and controls. The bill does not specify which agencies ISPs could disclose customer data to, but the structure and incentives in the bill raise a very real possibility that the National Security Agency or the DOD's Cybercommand would be the primary recipient." Holy Bejeezers, where are Batman and Robin when you need them?
What will happen if we don't stop CISPA?
CISPA effectively creates an exemption to all existing internet privacy laws. Pay attention here, because this means the government will have control over the entire internet, and would be able to censor anything they deem as a "threat" to national security. And what do those ding dongs deem a threat? Well, that is up for them to decide. With the power they would have, it would enable them to interpret anything as a potential "threat" if they really wanted to. Be afraid, very, very, very afraid.
This is just another trap to have our freedom stripped away even further. It is blaringly obvious that our very own government has slowly diminished the very freedoms we were promised at the inception of this "democracy." It is painful that it may not appear obvious that each new bill that is introduced and passed in Congress contains many clauses that most Americans aren't even aware of. This is why it is imperative we examine each new bill and law very closely. It is a shameful fact we have to protect ourselves from the very institution we pay to work in our best interest.
It blows my mind that social networks like Facebook support CISPA. Who is paying who off? Here is what Joel Kaplan, FB Vice President said was the reason they support the bill.
"One challenge we and other companies have had is in our ability to share information with each other about cyber attacks. When one company detects an attack, sharing information about that attack promptly with other companies can help protect those other companies and their users from being victimized by the same attack," Kaplan wrote a blog post on Friday. "Similarly, if the government learns of an intrusion or other attack, the more it can share about that attack with private companies (and the faster it can share the information), the better the protection for users and our systems."
Umm, what am I missing here? You need an anti-privacy law to get off your duff and let others know if you are being attacked? It is all to crazy making and once again we have to mobilize and put the pressure needed on our government to dump this dumb bill.