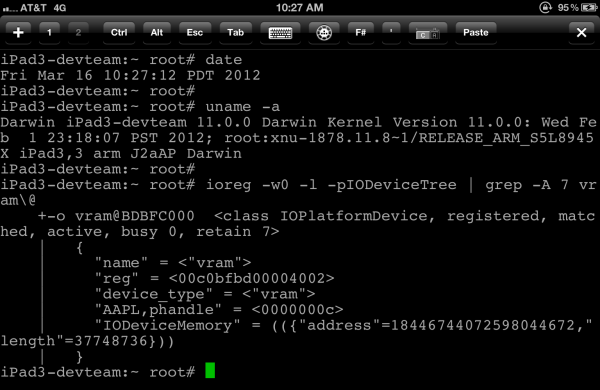 The new Apple iPad (third iPad, iPad 3) has already been jailbroken in at least three different ways. On the same day that Apple started shipping the new iPad out to consumers, there were reports that at least one hacker had already jailbroken the latest tablet.

The first to claim was @Musclenerd, a member of the iPhone Dev Team, tweeted a couple of images showing that he had already jailbroken the device. This must be a great relief for Apple fans who want to have their Apple devices, but don't want Cupertino based tech giant to keep it restricted as it wants.
Within the 24 hours of the iOS 5.1 update, teammate @pod2g revealed an untethered jailbreak for the iPad 2 and iPhone 4S. With the new iPad running iOS 5.1 and an A5X processor. His hack was followed by the announcement of a successful untethered jailbreak by teammate, @i0n1c, who released a video as evidence to his accomplishment:
Finally, a Tweet by @chpwn and @phoenixdev have revealed a third successful jailbreak, and accompanying photos of the jailbroken new iPad running the Cydia Store: "Jailbroken iPad (3), using a different method by myself and @phoenixdev: https://db.tt/mqIZmw96 https://db.tt/g2UlawxV"
Jailbreaking an iPhone, iPod touch, or iPad makes it possible to install apps that aren't available in Apple's App Store, among other goodies. Hacking or jailbreak of Apple devices was deemed illegal by officials in the US and hence. Jailbreaking devices so that it can run third-party software, was made legal in the year 2010 by the U.S. Copyright Office. However, that exemption is set to expire, and the Electronic Frontier Foundation (EFF) is asking people to lobby so that jailbreaking will continue to be protected by law.