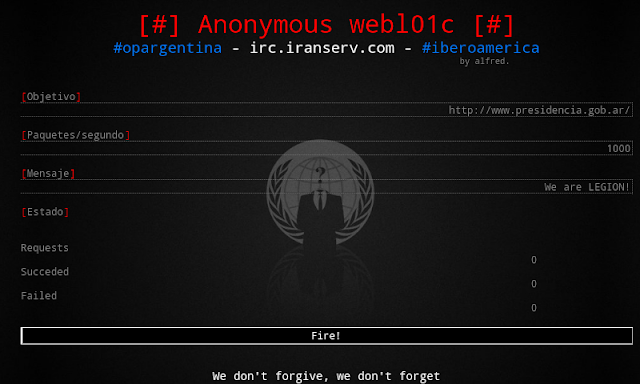 These Days Anonymous Hacker Group using a new tool WebLOIC. This tool is even easier to use than LOIC DDOS tool, requiring no download, it sends requests using Javascript in the user's browser. Just like LOIC, it is a quick path to prison, sending thousands of requests from your IP address to the target, accompanied by a slogan.

Recently Hackers Release and New Interface of WebLOIC, ie. for Android Mobile in the form of an Application named "LOIC para Android by Alfred". They Spread this tool via Anonymous social network accounts to execute the new attack in Various Anonymous operations against Argentinian government - such as #opargentina #iberoamerica.
When Attacker will click "Fire", a JavaScript will sends 1,000 HTTP requests with the message "We are LEGION!" that perform DoS attacks of Given Target URL.
This Application is Available to Download here.