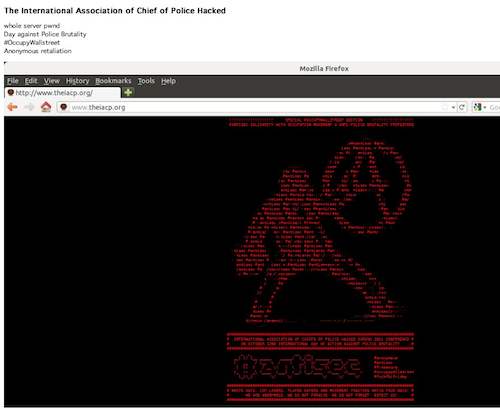 Anonymous, the Internet "hactivist" group, today, apparently in support of the Occupy Wall Street protest movement, hacked into several different police databases and leaked sensitive personal data, among them passwords, names, addresses, phone numbers and social security numbers from the Boston Police Patrolmens' Association (BPPA) and Birmingham, Alabama Police Department, according to several reports. Additionally, Anonymous claims to have hacked the International Association of Chiefs of Police, and offers the above image as proof.

A press release by Anonymous said that the hack was timed to the IACP meeting as part of a "Day of Action Against Police Brutality." Another document appears to be about 1,000 user names and passwords belonging to the Boston Patrolmans' Association.

In the video below, you can hear a hacker call the Baldwin country sheriff's office to say "your website has been defaced," and admit to the hack. The conversation was uploaded to YouTube. The call, made over Skype, comes from a British man who claims he hacked the website because he was bored, which goes against the wording of Anonymous' press release. Yet another example of how the collective is relatively disjointed.