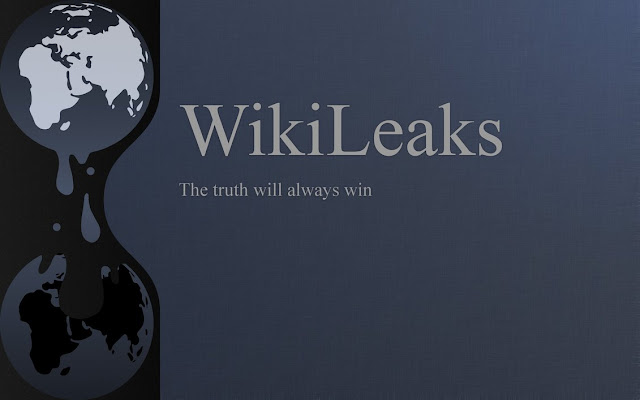 The wikileaks.org domain name was registered on 4 October 2006. The website was unveiled, and published its first document, in December 2006. The site claims to have been "founded by Chinese dissidents, journalists, mathematicians and start-up company technologists, from the US, Taiwan, Europe, Australia and South Africa".

The creators of WikiLeaks have not been formally identified. It has been represented in public since January 2007 by Julian Assange and others. Assange describes himself as a member of WikiLeaks' advisory board. News reports in The Australian have called Assange the "founder of WikiLeaks". According to Wired magazine, a volunteer said that Assange described himself in a private conversation as "the heart and soul of this organisation, its founder, philosopher, spokesperson, original coder, organizer, financier, and all the rest".

2006–08
WikiLeaks posted its first document in December 2006, a decision to assassinate government officials signed by Sheikh Hassan Dahir Aweys."] In August 2007, The Guardian published a story about corruption by the family of the former Kenyan leader Daniel arap Moi based on information provided via WikiLeaks. In November 2007, a March 2003 copy of Standard Operating Procedures for Camp Delta detailing the protocol of the U.S. Army at the Guantanamo Bay detention camp was released. The document revealed that some prisoners were off-limits to the International Committee of the Red Cross, something that the U.S. military had in the past repeatedly denied. In February 2008, WikiLeaks released allegations of illegal activities at the Cayman Islands branch of the Swiss Bank Julius Baer, which led to the bank suing WikiLeaks and obtaining an injunction which temporarily shut down wikileaks.org. The California judge had the service provider of WikiLeaks block the site's domain (wikileaks.org) on 18 February 2008, although the bank only wanted the documents to be removed but WikiLeaks had failed to name a contact. The site was instantly mirrored by supporters, and later that month the judge overturned his previous decision citing First Amendment concerns and questions about legal jurisdiction. In March 2008, WikiLeaks published what they referred to as "the collected secret 'bibles' of Scientology," and three days later received letters threatening to sue them for breach of copyright. In September 2008, during the 2008 United States presidential election campaigns, the contents of a Yahoo account belonging to Sarah Palin (the running mate of Republican presidential nominee John McCain) were posted on WikiLeaks after being hacked into by members of Anonymous. In November 2008, the membership list of the far-right British National Party was posted to WikiLeaks, after briefly appearing on a blog. A year later, on October 2009, another list of BNP members was leaked.

2009
In January 2009, WikiLeaks released 86 telephone intercept recordings of Peruvian politicians and businessmen involved in the 2008 Peru oil scandal. In February, WikiLeaks released 6,780 Congressional Research Service reports followed in March, by a list of contributors to the Norm Coleman senatorial campaign and a set of documents belonging to Barclays Bank that had been ordered removed from the website of The Guardian. In July, it released a report relating to a serious nuclear accident that had occurred at the Iranian Natanz nuclear facility in 2009. Later media reports have suggested that the accident was related to the Stuxnet computer worm. In September, internal documents from Kaupthing Bank were leaked, from shortly before the collapse of Iceland's banking sector, which led to the 2008–2010 Icelandic financial crisis. The document shows that suspiciously large sums of money were loaned to various owners of the bank, and large debts written off. In October, Joint Services Protocol 440, a British document advising the security services on how to avoid documents being leaked was published by WikiLeaks. Later that month, it announced that a super-injunction was being used by the commodities company Trafigura to gag The Guardian (London) from reporting on a leaked internal document regarding a toxic dumping incident in the Ivory Coast. In November, it hosted copies of e-mail correspondence between climate scientists, although they were not originally leaked to WikiLeaks. It also released 570,000 intercepts of pager messages sent on the day of the 11 September attacks. During 2008 and 2009, WikiLeaks published the alleged lists of forbidden or illegal web addresses for Australia, Denmark and Thailand. These were originally created to prevent access to child pornography and terrorism, but the leaks revealed that other sites covering unrelated subjects were also listed.

2010
In March 2010, WikiLeaks released a secret 32-page U.S. Department of Defense Counterintelligence Analysis Report written in March 2008 discussing the leaking of material by WikiLeaks and how it could be deterred. In April, a classified video of the 12 July 2007 Baghdad airstrike was released, showing two Reuters employees being fired at, after the pilots mistakenly thought the men were carrying weapons, which were in fact cameras. In the week following the release, "wikileaks" was the search term with the most significant growth worldwide in the last seven days as measured by Google Insights. In January 2010, WikiLeaks received the first test cable. A 22-year-old US Army intelligence analyst, PFC (formerly SPC) Bradley Manning, leaked a US embassy cable relating to IceSave, thereafter referred as "Reykjavik 13". In June 2010, he was arrested after alleged chat logs were turned in to the authorities by former hacker Adrian Lamo, in whom he had confided. Manning reportedly told Lamo he had leaked the "Collateral Murder" video, in addition to a video of the Granai airstrike and around 260,000 diplomatic cables, to WikiLeaks. In July, WikiLeaks released 92,000 documents related to the war in Afghanistan between 2004 and the end of 2009 to The Guardian, The New York Times and Der Spiegel. The documents detail individual incidents including friendly fire and civilian casualties. At the end of July, a 1.4 GB "insurance file" was added to the Afghan War Diary page, whose decryption details would be released if WikiLeaks or Assange were harmed. About 15,000 of the 92,000 documents have not yet been released on WikiLeaks, as the group is currently reviewing the documents to remove some of the sources of the information. WikiLeaks asked the Pentagon and human-rights groups to help remove names from the documents to reduce the potential harm caused by their release, but did not receive assistance. Following the Love Parade stampede in Duisburg, Germany, on 24 July 2010, a local resident published internal documents of the city administration regarding the planning of Love Parade. The city government reacted by securing a court order on 16 August forcing the removal of the documents from the site on which it was hosted. On 20 August 2010, WikiLeaks released a publication entitled Loveparade 2010 Duisburg planning documents, 2007–2010, which comprised 43 internal documents regarding the Love Parade 2010. Following on from the leak of information from the Afghan War, in October 2010, around 400,000 documents relating to the Iraq War were released in October. The BBC quoted The Pentagon referring to the Iraq War Logs as "the largest leak of classified documents in its history." Media coverage of the leaked documents focused on claims that the U.S. government had ignored reports of torture by the Iraqi authorities during the period after the 2003 war.

Diplomatic cables release
On 28 November 2010, WikiLeaks and five major newspapers from Spain (El País), France (Le Monde), Germany (Der Spiegel), the United Kingdom (The Guardian), and the United States (The New York Times) started to simultaneously publish the first 220 of 251,287 leaked confidential — but not top-secret — diplomatic cables from 274 US embassies around the world, dated from 28 December 1966 to 28 February 2010. WikiLeaks plans to release the entirety of the cables in phases over several months.

The contents of the diplomatic cables include numerous unguarded comments and revelations regarding: critiques and praises about the host countries of various US embassies; political manuvering regarding climate change; discussion and resolutions towards ending ongoing tension in the Middle East; efforts and resistance towards nuclear disarmament; actions in the War on Terror; assessments of other threats around the world; dealings between various countries; US intelligence and counterintelligence efforts; and other diplomatic actions. Reactions to the United States diplomatic cables leak include stark criticism, anticipation, commendation, and quiescence. Consequent reactions to the US government include ridicule, sympathy, bewilderment and dismay. On 14 December 2010 the United States Department of Justice issued a subpoena directing Twitter to provide information for accounts registered to or associated with WikiLeaks. Twitter decided to notify its users. The overthrow of the presidency in Tunisia has been attributed in part to reaction against the corruption revealed by leaked cables.

2011 : Guantanamo files
In late April 2011, files related to the Guantanamo prison were released.

Wow, for being only 5 years old they have done a remarkable and outstanding job of serving the people. The one thing most governments in the world have left off their agenda's. Keep up the good work Wikileaks and we stand in support and behind you.
Support Wikileaks here