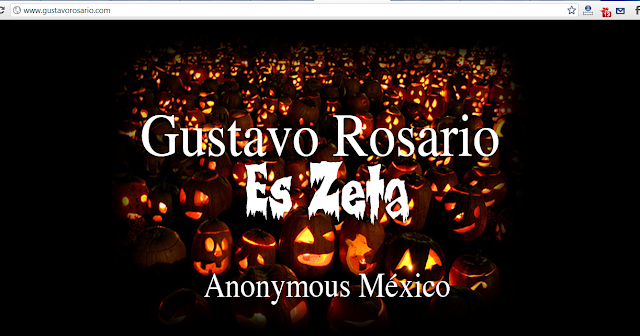 Anonymous Mexico is going head-to-head with one of the most dangerous criminal organizations in the world, the Mexican cartel Los Zetas. With this Anonymous Proofs that they are not just a common Internet users as cowards behind a keyboard. Not only has the Anonymous threatened to reveal names, but it has also started making good to its threats.

Mexican Anonymous hackers is warning a Mexican drug cartel to release one of its members, kidnapped from a street protest, or it will publish the identities and addresses of the syndicate's associates, from corrupt police to taxi drivers, as well as reveal the syndicates' businesses.

The website of a Mexican politician suspected of connections to the cartel and The page is still defaced as we write; here is what it looks like ("es Zeta" meaning "is Zeta"):

"You made a huge mistake by taking one of us. Release him," says a masked man in a video posted online on behalf of the group, Anonymous. Here is the Spanish speaking video put out by Anonymous.
As Mike Vigil, a retired head of international operations for the DEA said following this announcement – the Zetas Cartel needs to take Anonymous seriously because by publishing the names they identify the Zetas Cartel members to rivals and they will go after them.

If Anonymous can make good on its threats to publish names, it will "most certainly" lead to more deaths and could leave bloggers and others open to reprisal attacks by the cartel, contends Stratfor, an Austin-based global intelligence company.