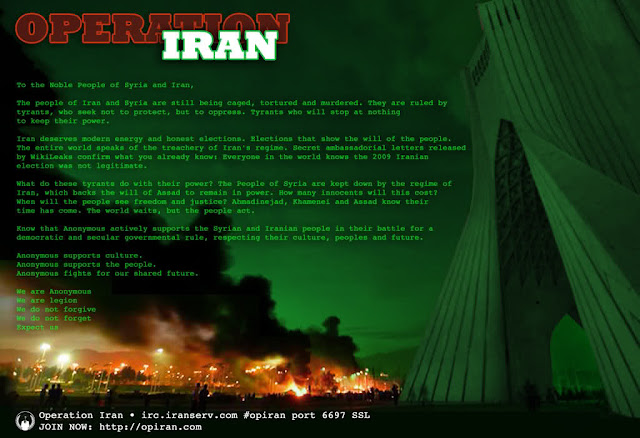 [Salutation]
To the Noble and Brave People of Iran and Syria,
[Acknowledge plight]
The people of Iran and Syria are still being caged, tortured and murdered. They are ruled by vile leaders, who seek not to protect, but to harm. Leaders who will stop at nothing to keep their power.
[Statement of Facts and Outcomes]
Iran deserves modern affortable energy and fair elections. The entire world speaks of the treachery of Iran's fraudulous regime. Newly secret US ambassadorial letters, released by WikiLeaks, confirm what you already know. [irc.iranserv.com #opiran port 6697 ssl]
[Outline Client Condition]
The people of Syria are beaten by regime police from Iran. The People of Syria are kept down by the regime of Iran, which backs the will of Assad to remain in power. No matter how many innocent victims fighting for freedom and social justice, this may cost.
[Support]
Ahmadinejad, Khamenei and Assad know their time has come. The world waits, the people act. Know that Anonymous actively supports the Syrian and Iranian people in their battle for a democratic and secular governmental rule, respecting their culture, peoples and future.