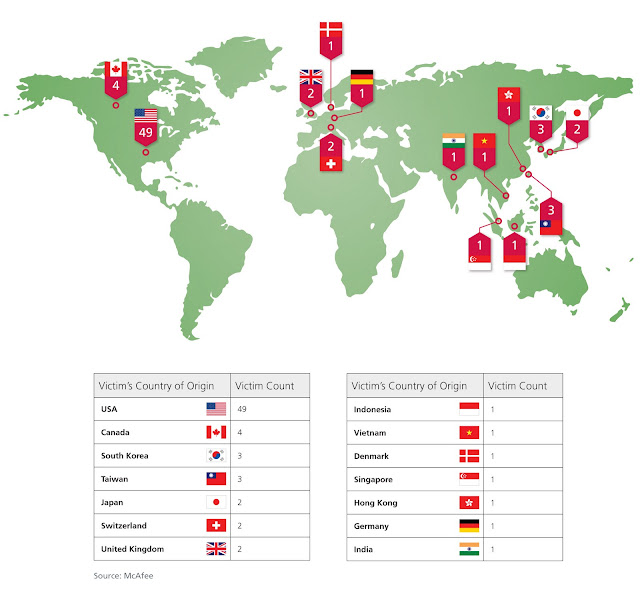 When the history of 2011 is written, it may well be remembered as the Year of the Hacks. McAfee publish a new report that it says is one of the most comprehensive analysis ever revealed of victim profiles from a five-year long targeted operation by a specific actor dubbed Operation Shady RAT.

McAfee released a 14-page report that details the largest coordinated cyber attack recorded to date. This particular attack, possibly orchestrated by China, broke into 72 organizations over the course of five years.The targets include the US, Canada, Taiwan, India, South Korea, and Vietnam. The attack also hit the UN, the International Olympic Committee, the World Anti-doping agency, defense contractors, tech companies and more. Most attacks lasted less than a month, but some, like that on the UN Secretariat, lasted for almost two years.


McAfee say learned of the extent of the hacking campaign in March this year, when its researchers discovered logs of the attacks while reviewing the contents of a 'command and control' server directing some of the attacks, which they had discovered in 2009 as part of an investigation into security breaches at defense companies.

The name they gave the attacks, Operation Shady RAT, refers to the acronym for 'remote access tool,' a type of software that allows users to to access computer networks. They say that it is possible that further attacks from the same source may still be going undetected. While McAfee have not suggested who may be behind the attacks, other security experts have suggested that China is the likeliest candidate.

This is a problem of massive scale that affects nearly every industry and sector of the economies of numerous countries, and the only organizations that are exempt from this threat are those that don't have anything valuable or interesting worth stealing.