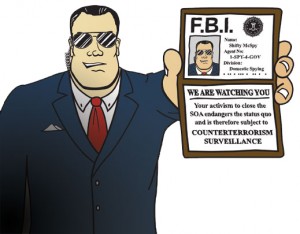 Paypal collected 1000 IP addresses of those carrying out Anonymous' DDoS attacks against PayPal last December. To be fair the names on the list will probably be the bottom feeding script kiddies rather than the hackers at the top of Anomymous's greasy pole. The clever hackers know to mask their IP addresses first.
An FBI affidavit suggests the Untouchables may have lots more people to arrest. FBI agent Chris Thompson says PayPal security officials were in close contact with the bureau beginning 6 December, two days after PayPal froze WikiLeaks' donation account and the first day it began receiving serious denial-of-service traffic.
FBI agents began monitoring Anonymous press releases while PayPal collected traffic logs on a Radware intrusion prevention system installed on its network.

Paypal gave the feds a USB thumb drive containing the Radware reports, which documented "approximately 1,000 IP addresses that sent malicious network packets to PayPal during the DDoS attacks." These were the IP addresses that sent the largest number of packets. Packets coming from Anonymous contained strings like "wikileaks," "goof," and "goodnight". The affidavit was offered in support of a search warrant for the home of an Arlington, Texas couple and their son. They have not been charged yet, but the house was the source of 3,678 packets in about two-and-a-half hours.