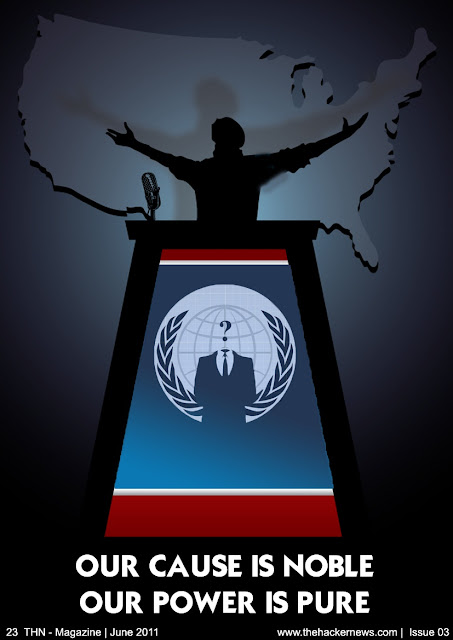 Note : The Interview is taken from The Hacker News Magazine June Edition - Total Exposure .You can Download all THN Magazine editions from here.


Anonymous is the political movement of change for the 21st century. Anonymous can and certainly will accomplish what many other political and peace movements of the past could not. When corruption, destruction and mayhem strikes from governments or corporations it is the goal of anonymous to awaken that entity and the public that a change must occur. We must understand that the Anonymous who strives for political change and world peace must be free to work without the mistrust and misdeeds of others who tarnish their good work. Anonymous is the gift we have been waiting for. Honest and trustworthy persons working hard on our behalf for the betterment of mankind.The Anonymous ,Need of 21st century,

Let's Talk with Anony_ops ,Now known as Anon_Central on Twitter :


THN : Who is Ryan and what his matter with Anonymous.
Anony_ops : Ryan was a network administrator and unreliable like many others. Basically, we knew Ryan would explode one day. He was like the Yellowstone Caldera, he occasionally had little outbursts and some people who knew him from before warned us that he'd had massive eruptions in the past.

THN : Do you think there are more people like Ryan trying to break the Unity of Anonymous?
Anony_ops : Yes. We have had lots of guys like him in the past and I bet there are still some lurking. But they will not do what he did. In my opinion what he did was stupid and it didn't achieve anything.

THN : Is Anonymous or supporters of Anonymous behind the Sony Hacks?
Anony_ops : Anonymous IRC (AnonOps) is not involved in the Sony hacks although since being Anonymous, many people can create their own bases (cells) and work on their plans. So maybe Anonymous is involved in it or maybe not? We will never know. But I can tell you that they definitely took advantage of the whole OpSony situation. What I would suggest is that whenever Anonymous does something big, we brag about it. The fact that we denied it is a strong indicator that we didn't do it - if we had succeeded in breaking into their servers, we would have been gloating about it all over the internet.


It was quite clear that no one knew what was going on with Sony and Sony blamed us for their shitty security intrusion. Further, the people that actually participated in the intrusion saw that they could use Anonymous as a scapegoat but we would have kept the "Anonymous" tradition and not have left our motto in a single file, we would have left it in something along the lines of 9001 files. So to answer your question, we want a apology from Sony. They have no credible proof that the offenses were committed by "Anonymous" only what some copy cat left there causing confusion in the reports. Because of that we were subsequently harassed by a misguided and misinformed Sony who then started clogging up our servers.

Quote: <evil> some people will take advantage of it for their malicious shit.

THN : Tell us something about the Spanish Revolution
Anony_ops : You better ask this to Spanish Anons, I have no right to answer this because I'm not the right person. Sorry about that.

THN : What are the other operations recently born in various parts of world?
Anony_ops : There are over 9000 operations which are on-going right now. Some are #OpGreece, #OpSpain, #OpSpain, #OpMexico, #OpColombia etc.

THN : Is there any core team of Anonymous or is your every decision and action independent?
Anony_ops : There is no core team of Anonymous. If you are pointing towards Network Operators then well, there are just network operators and they manage all the tech stuff. They don't get involved in Anonymous' work and operations except to keep IRC channels free from trolls, spammers and bot attacks. Our decisions and actions are based upon people's will and teamwork. What we do in IRC is communicate with each other, form a plan and get as many people involved, of course anonymously, and we all vote on a specific action. Seems simple? It's NOT. lol So, our every action is a collective decision.


THN : Everyone knows that Anonymous is against injustice, corruption, and abuse of government power. How much are you satisfied with your own effort regarding this great responsibility?
Anony_ops : I am very much satisfied with what I am doing. What I do is carry the information and expose it to the public which otherwise would be very difficult for the public to get. You can call me a bastard Anon or whatever. I don't give a shit. We only do it for the Lulz. Anonymous is not a secret anymore, in times of pain and suffering, your ignored neighbor could be your helping hands and a light of hope. I think Anonymous represents hope for mankind because people have had enough with these criminal organizations, establishments and governments. They are fed up with their laws and wars. They've sacrificed enough. It's time for people to unite and act as one and what I'm doing is playing some part in that. So I'm very proud. I wish everyone could become Anonymous and serve their fellow brothers and sisters. Being an anon is being yourself first then sharing whatever you can.

THN : Anonymous are basically Activists. Are hackers also supporting you to make it Hacktivism?
Anony_ops : Yes. They work independently and sometimes under certain circumstances they work within the hive. As you well know, aside from the public rally's, Anonymous has also taken part in many online operations, most of which needed the use of hackers to accomplish what was needed. A great deal of Anon's submit themselves to the LOIC Hive, faxing and other methods but some websites, like the US Chamber, needed more then that, which is where the hackers have come in. The fact that they do this is to further our strength as Anonymous, and many of them, whether they have help from the Anon's or they do it single handed, will give full credit to Anonymous, because they feel the cause is just. So yes, to answer your question, hackers are supporting us and with every new operation it gives us a stronger grasp on the "Collective" that is Anonymous.

THN : What are the other issues on your list that may become the next Revolution?
Anony_ops : Operations are dependent upon their motives and their importance. Anyone's free to start any operation but valid ops with valid reasons are supported by all Anons and that's how they move forward.


THN : The issue with NATO and does Anonymous plan something against NATO ?
Anony_ops : In my opinion NATO is just following the footsteps of the Pentagon idiots and the IRC (people) are yet to decide the action to take against them. But we won't fire first!

THN : Major Security Breaches of 2011 are related with Anonymous. Is this diverting the style of Anons work?
Anony_ops : There are so many anonymous cells now that no one can keep track of them. But one thing is for sure, the smegma is out of the bottle... try stopping it. Anonymous is worldwide from every continent and every country. There are literally 100's of IRCs which are now dedicated to anonymous. I really don't know what the future holds for Anonymous but what I can tell you for sure is I will be tweeting about them. :)

THN : Any message for the World from THN Platform?
Anony_ops : This is to all human beings on this planet: Share and keep information free because it is our only life line to the future. To the crooks in governments and corporations I can only say, you're done. There are no more secrets. You can't hide from Anonymous. We know what you are doing and we have made it our mission to expose you. People from time beginning have fought injustice but they haven't had the right weapons. We do now. Remember this:


WE ARE ANONYMOUS
ANONYMOUS IS LEGION
WE DO NOT FORGET
WE DO NOT FORGIVE
EXPECT US
Thank you Anony_ops OR Anon_Central for such a Great Interview :), The Hacker News Team.