February 21, 2011Mohit Kumar
This project was originally unveiled at the recently concluded ShmooCon. It shows a lot of promise and the authors two years of study and experimentation. The name is Ubertooth.
Ubertooth is an open source 2.4 GHz wireless development platform suitable for passive bluetooth monitoring. It aims to be the world's first open source and affordable bluetooth monitoring and development platform. In reality, the commercial equivalents of such tools are available for 10000$ and above!
Since it's inception from almost two years ago, there are two version (both open source) of the Ubertooth platform (if we may call it!). They are as follows:
Building this device ±3 GHz costs about a 100$! This includes all the cost of the hardware. A typical device looks like the following: 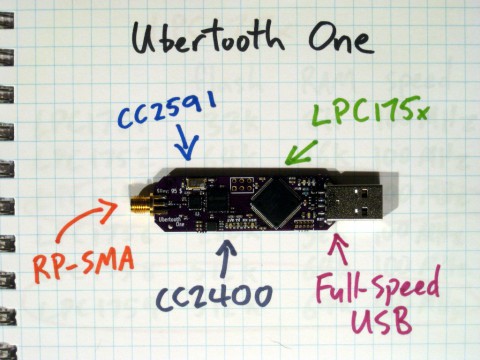 A few of its features are:
Now, you might think that all this looks good! But, what do I monitor the sniffed bluetooth data on my computer? Worry not – for you have the old favourite and ever faithful tool when it comes to wireless sniffing mumbo-jumbo: Kismet! It already implements passive Basic Rate Bluetooth monitoring! Talking about Ubertooth One, it consists of the following:
Unfortunately, the Ubertooth hardware architecture is not compatible with bluetooth Enhanced Data Rate (EDR) modulations. However, EDR packets begin with a Basic Rate (1 Mbps GFSK) header. So Ubertooth could be used for identification and partial monitoring of EDR transmissions. But, worry not, with time and MONEY, this shortcoming could well be overcome. How? The author has launched a KickStarter project and needs your support. This will end on the 28th of February 2011. You can even get yourselves a completely assembled copy of Ubertooth One!
OR
Download the software part of Ubertooth One here.