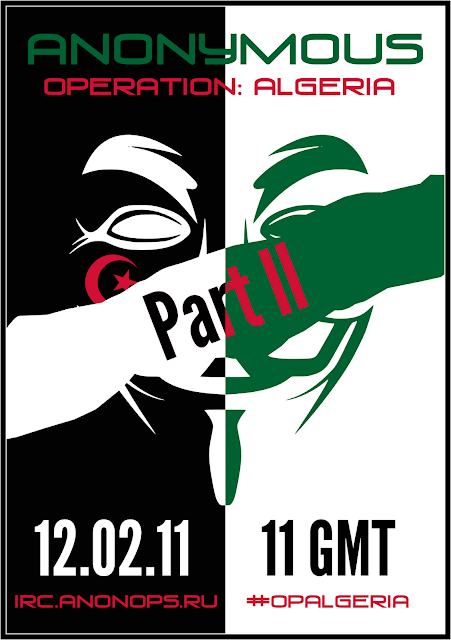 FREE-THINKING CITIZENS OF THE WORLD,

The Algerian government imposes, upon its own citizens, intolerable restrictions on their basic liberties. The Algerian government wants to enforce a future where injustices remain unchallenged and where existing exploitation of one man by another remains unpunished. The Algerian government hides the truth from its citizens and denies them free expression and access to information. Let's call for an end to censorship. Now is the time for freedom and transparency, a time for people to express themselves freely and to be heard from anywhere across the world. How else than through well informed citizens can a society prosper and flourish?

The Algerian government hereby declares itself an enemy of Anonymous and the people. Anonymous hears the cries for freedom from the Algerian people, and has decided to step up. We cannot, and will not, remain silent while this injustice is being done. Anonymous will help them in this struggle against oppression. We believe the Algerian attempts at censorship and oppression are doomed to fail if each one of us takes up our individual responsibilities: For only we, the people, decide to make it so.

To the Algerian government: Restrictions on the freedom of speech and denial of information to your citizens are in direct violation of the Universal Declaration of Human Rights, and cannot be tolerated. Anonymous challenges all those who are involved in censorship. Not only will Anonymous take action, Anonymous will also make sure that the international media sees the horrid reality you impose upon your people. It is in the hands of the Algerian government to end this; continue your repression and you will be subject to civil protest - lend an ear to the claim of freedom from your people and the hostilities will cease.

To the Algerian people: We stand together and united against this oppression. This struggle is not just for you alone, but for the whole of mankind. Citizens are no longer quiet, and can no longer be simply peddled and choked into submission. When forced to by the threat of oppression, we can be loud as hell - and when the people roar, it will send shivers down the spines of all those who want to stifle our freedom and take our precious liberties away.

Anonymous is your brothers and sisters, your sons and daughters, your parents and your friends, regardless of age, gender, race, religion, ethnicity, or place of birth. Anonymous is you. You will not be denied your right to free speech, free press, free association and your universal right to freely access information, both in real life and through the internet.

Join us in this battle for freedom of information worldwide! For as Edmund Burke once said: "All that is necessary for the triumph of evil is that good men do nothing."