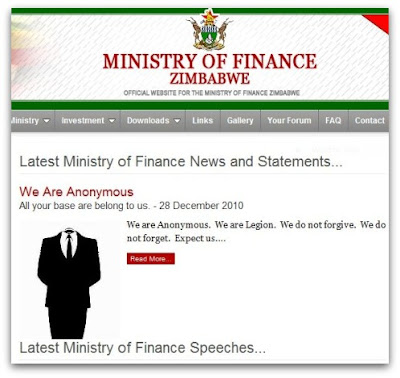 Hacktivists have struck a blow against the regime in Zimbabwe by attacking a number of government websites. The cyber-assault appears to have been in support of newspapers who published secret cables in the ongoing WikiLeaks saga, to the annoyance of the-powers-that-be in the country.
Grace Mugabe, wife of Zimbabwe president Robert Mugabe, was recently reported to be suing a newspaper for $15 million after it published a WikiLeaks cable that claimed she has benefited from illegal diamond trading.
As news spread amongst the loosely-knit group of Anonymous hackers who support WikiLeaks, websites belonging to the Zimbabwe government and Robert Mugabe's ZANU-PF party were hit by distributed denial-of-service (DDoS) attacks and, in the case of the Finance Ministry, defacements.
The Zimbabwe government's online portal at www.gta.gov.zw and the official ZANU-PF website continue to be offline, and the Finance Ministry's website now displays a message saying it is under maintenance.
A statement published on an Anonymous website offered an explanation for the attacks, which have been dubbed "Operation: Zimbabwe":

We are targeting Mugabe and his regime in the ZanuPF who have outlawed the free press and threaten to sue anyone publishing wikileaks.

Although many people are deeply concerned about corruption in Zimbabwe, I am certain that internet attacks are not the answer.
It seems kind of ironic to me that the hackers - who are engaged in actions seemingly intended to be pro-WikiLeaks and which they say are in the name of free speech - are using denial-of-service attacks that by their very nature prevent others from communicating.