December 03, 2010Mohit Kumar
In a major embarrassment, the website of premier investigating agency CBI was hacked tonight by programmers identifying themselves as "Pakistani Cyber Army". The home page of the CBI website had a message from the 'Pakistani Cyber Army' warning the Indian Cyber Army not to attack their .

The hackers have made a mockery of the country's cyber security by infiltrating into the CBI website, supposed to be one of the most secure websites. The CBI is connected to the command centre of world police organisation - Interpol - 24x7.
The message from the hackers also spoke about the filtering controls provided by the National Informatics Centre (NIC), a body which mans computer servers across the country.
Intelligence agencies have been often warning the government that proper cyber security was not being ensured in government offices and that no security audit was being carried out.
The Pakistani Cyber Army has also warned that it would carry out "mass defacement" of other websites.

People who were logged in to the Central Bureau of Investigation's home page redirected to a page that said this effort was in response to Pak websites hacked by 'Indian Cyber Army'.
The CBI Website's home page mentions these lines –
"This attempt is in response to the Pakistani websites hacked by 'Indian Cyber Army'. We told you before too.. we are sleeping but not dead.. remember PCA (Pakistan cyber army)!..back off kids or we will smoke your d00rs off like we did before..
lets see what you investigating agency so called CBI can do for you or for us! haha… one more attempt from your side..we got your every website lying around here like its our local server! buahahaha.. so we would like to say to your 31337 hackers and your 31337 NIC team..
go and read some more books ..you guys are seriously bunch of script_kiddies! ..you know nothing rite now.. got r00t access to NTC server? ..mass defacements..how about something like this..a planned attack! haha.. btw we got r00t to your NIC too ..your filtering sucks..have fun! and DO NOT DISTURB..we got better things to do.. ..stop complaining about Pakistani websites security..secure your own ___ first..thats what intelligent people do!..lol…tata
A message by Pakistan Cyber Army
Pakistan Zindabad!"

HEX786 didn't deface those websites, instead inserted a html file named as HEX786.html in root directory of mentioned websites, exactly the way ICA did to Pakistani websites. 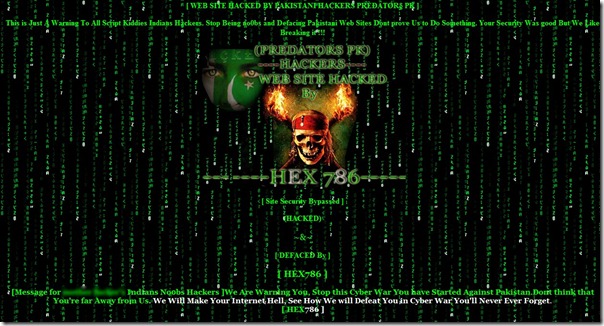 HEX786 warned Indian hackers to not to initiate the cyber war. He writes:


Indians No0bs Hackers We Are Warning You, Stop this Cyber War You have Started Against Pakistan. Don't think that You're far Away from Us. We Will Make Your Internet Hell, See How We will Defeat You in Cyber War You'll Never Ever Forget.

Complete list of hacked websites is given Here
It merits mentioning here that senior hackers on both side of borders are advising their communities to not to engage themselves in such activities.