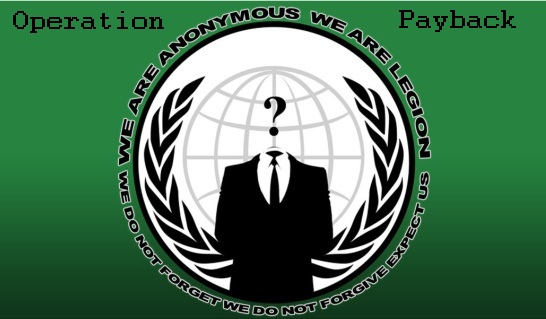 Speaking on camera for the first time, the cyber-insurgent "Bass" from the group Anonymous, revealed details of how they operate and their growing size.
"Our pool of targets is actually very limited," the masked spokesman told Sky News. "We are going after the agencies that were directly involved in the censorship of WikiLeaks.
"They include PayPal who cut off services and withheld funds. The same with Visa and MasterCard, then Amazon who cut off their service support.
"We don't attack the media, that is a big no no. Even the media that has been critical of us, we don't attack any of the news," he said. "Facebook, Twitter and social network sites -- even though they have done some things against us we're not going to go after them."

In the last attack the group said it mobilized 9,000 volunteers as part of a "hive-mind" -- angry bees to smother the websites of companies who have withdrawn support from Julian Assange's WikiLeaks.
"The software itself has been downloaded over 300,000 times," Bass told Sky News. "Someone proposes the target, we've run intelligence on them, on what we consider the pros and cons of every target and a lot of other factors involved."
The Internet attacks are illegal in most Western countries, which is why these Anonymous spokesmen refuse to reveal their identities. They pledged to carry on their attacks and said they are developing new and more sophisticated types of malicious software.
The U.K. Metropolitan Police has revealed it has been examining the group for months and will investigate recent attacks on Visa, MasterCard and PayPal. And with its attack on some of the world's best known credit card firms, the Anonymous group has taken Internet aggression from mere hacking to cyber-insurgency.
Meanwhile, revolutionary figurehead Julian Assange is in London's High Court today as part of his latest battle against extradition to Sweden. The cyber whistleblower has categorically denied claims that he raped or sexually molested two Swedish women.