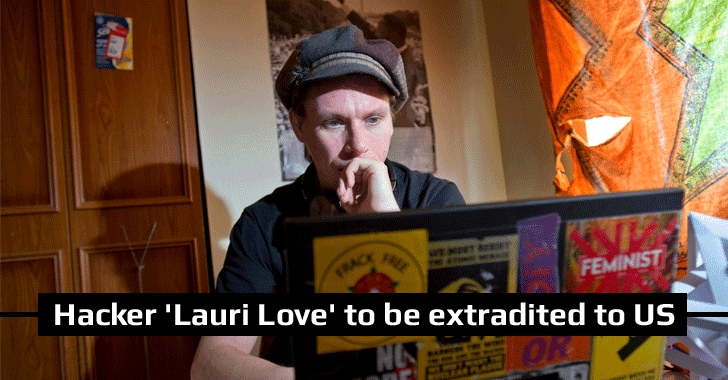 September 17, 2016Swati Khandelwal
British citizen and alleged hacker Lauri Love will be extradited to the United States to face allegations of hacking into United States government computer systems, a UK judge ruled on Friday. Love, 31, is currently facing up to 99 years in prison for allegedly hacking into the FBI, the US Army, the US Missile Defence Agency, the National Aeronautics and Space Administration (NASA), and New York's Federal Reserve Bank during 2012 and 2013. US Prosecutors claim that Love was allegedly involved in #OpLastResort , an online protest linked with the Anonymous collective following the persecution and untimely death of activist Aaron Swartz, who committed suicide in 2013 while under federal charges for data theft. Speaking at Westminster Magistrates' Court in London, District Judge Nina Tempia said : "I'll be extraditing Mr. Love, by which I mean I'll be passing the case to the Secretary of State." Tempia said Love could appeal against the court decisi

February 13, 2013Mohit Kumar
The hacktivist group Anonymous says it's planning to block all live streams of President Obama's State of the Union address Tuesday night, in an operation entitled " Operation SOTU ". " We reject the State of the Union. We reject the authority of the President to sign arbitrary orders and bring irresponsible and damaging controls to the Internet, " the statement reads. " The President of the United States of America, and the Joint Session of Congress will face an Army tonight. " Anonymous group is upset with a pending Internet security bill. According to Anonymous and other Internet freedom activists, if the CISPA (Cyber Intelligence Sharing and Information Act) is passed it will infringe on online privacy and freedom. A Twitter account associated with Anonymous also hinted by tweeting ," ADVANCED WARNING: This year's State of the Union Address WILL be cancelled if internet regulation is passed by executive order #opLastResort " &qu
Next Page 