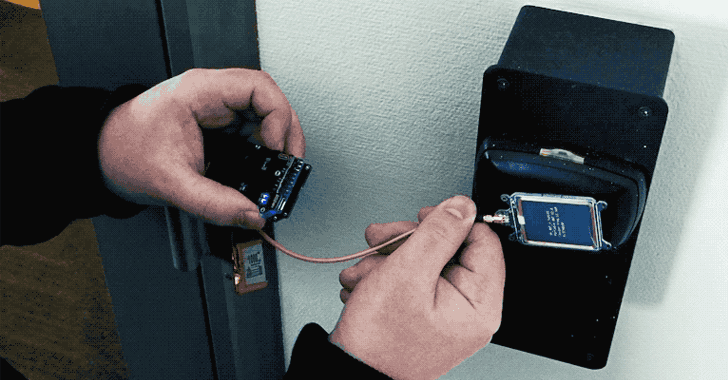 April 26, 2018Swati Khandelwal
If you often leave your valuable and expensive stuff like laptop and passports in the hotel rooms, then beware. Your room can be unlocked by not only a malicious staff having access to the master key, but also by an outsider. A critical design vulnerability in a popular and widely used electronic lock system can be exploited to unlock every locked room in a facility, leaving millions of hotel rooms around the world vulnerable to hackers. The vulnerability has been discovered in Vision by VingCard locking system—made by the world's largest lock manufacturer, Assa Abloy, and deployed in more than 42,000 facilities in 166 different countries, which equals to millions of doors. After thousands of hours work, F-Secure researchers Tomi Tuominen and Timo Hirvonen managed to build a master key that could be used to unlock doors and gain entry to any of the hotel rooms using the Vision by VingCard digital lock technology, without leaving a trace on the system. How Hackers Built
Next Page 
Popular This Week
Zoom Caught in Cybersecurity Debate — Here's Everything You Need To Know
New Zoom Hack Lets Hackers Compromise Windows and Its Login Password
How Just Visiting A Site Could Have Hacked Your iPhone or MacBook Camera
Unveiled: How xHelper Android Malware Re-Installs Even After Factory Reset
7 Ways Hackers and Scammers Are Exploiting Coronavirus Panic
Dark Nexus: A New Emerging IoT Botnet Malware Spotted in the Wild
COVID-19: Hackers Begin Exploiting Zoom's Overnight Success to Spread Malware
Secure Remote Working During COVID-19 — Checklist for CISOs
WARNING: Hackers Install Secret Backdoor on Thousands of Microsoft SQL Servers
Exclusive Offers