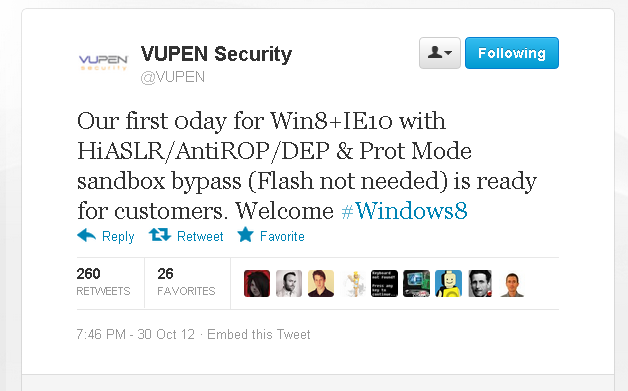 November 01, 2012Mohit Kumar
French security researcher firm and famous bug hunters at Vupen announced that it had already developed an exploit that could take over a Window 8 machine running Internet Explorer 10, in spite of the many significant security upgrades Microsoft built into the latest version of its operating system. Windows 8 operating system released last week, and now Microsoft itself has not been aware of security vulnerabilities available in release. " We welcome #Windows 8 with various 0Ds combined to pwn all new Win8/IE10 exploit mitigations, " Vupen posted on Twitter . Bekrar's claim follows up on his promise earlier in the month that Vupen would be ready to compromise Windows 8 immediately upon its launch: " Windows 8 will be officially released by MS on Oct 26th, we'll release to customers the 1st exploit for Win8 the same day #CoordinatedPwnage " "T he in-depth technical details of the flaws will be shared with our customers and they can use them to protect their critical infrastruc
Next Page 