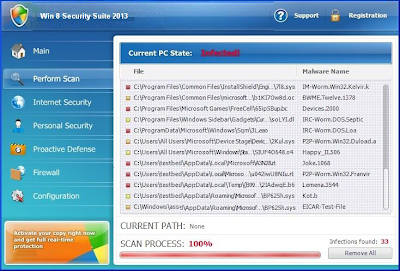 November 01, 2012Mohit Kumar
Late in August McAfee Labs discovered a Fake Antivirus program that claims to detect infections, and displays alerts to scare users into purchasing protection. On the contrary, this program is not genuine software and has nothing to do with reliable and effective AV tools. The truth is that this is another scam application developed to enter your PC through vulnerabilities in outdated programs. Trend Micro, which detects the threat as TROJ_FAKEAV.EHM said, " After infecting a user's system, this malware scares its victim into buying the "product" by displaying fake security messages, stating that the computer is infected with spyware or other malware and only this product can remove it after you download the trial version. As soon as the victim downloads Win 8 Security System, it pretends to scan your computer and shows a grossly exaggerated amount of nonexistent threats ". This sort of malware is commonplace, with examples existing for Windows XP, Windows Vista, Windows 7 and even
Next Page 
Popular This Week
Update Google Chrome to Patch 2 New Zero-Day Flaws Under Attack
Critical Flaws Discovered in Azure App That Microsoft Secretly Installs on Linux VMs
Microsoft Releases Patch for Actively Exploited Windows Zero-Day Vulnerability
Apple Issues Urgent Updates to Fix New Zero-Day Linked to Pegasus Spyware
Malware Attack on Aviation Sector Uncovered After Going Unnoticed for 2 Years
You Can Now Sign-in to Your Microsoft Accounts Without a Password