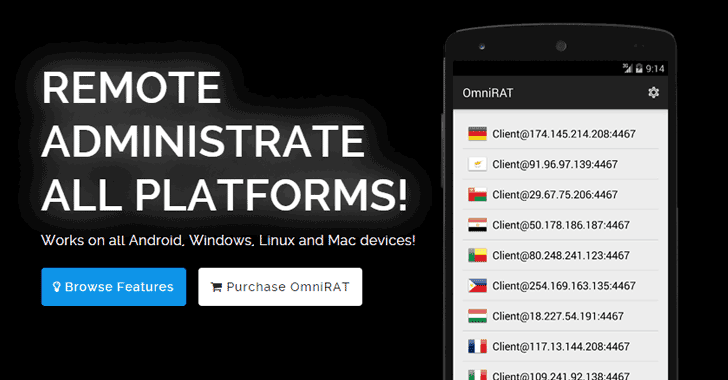 Jun 27, 2019
The German police yesterday raided the house of the developer of OmniRAT and seized his laptop, computer and mobile phones probably as part of an investigation into a recent cyber attack, a source told The Hacker News. OmniRAT made headlines in November 2015 when its developer launched it as a legitimate remote administration tool for IT experts and companies to manage their devices with explicit permissions. Available between $25 and $100, OmniRAT quickly became one of the most popular remote administration tools, allowing users to monitor Android, Windows, Linux, and Mac devices remotely and access every available information on them. However, just like any other remote administration tool like DroidJack, DarkComet, AndroRAT, and njRAT, some customers of OmniRAT also used the tool for illicit purposes, especially because it was available at a far cheaper price than other RATs in the market. In one such event earlier this year, a group of hackers attempted to target severa

Jul 17, 2018
As it was speculated that the author of LuminosityLink RAT was arrested last year, a plea agreement made available to the public today confirmed the news. Back in September last year, Europol's European Cybercrime Centre (EC3) and National Crime Agency began the crackdown on the LuminosityLink RAT, targeting sellers and users of the malware, which resulted in the seizure of a considerable number of computers and internet accounts across the world, and complete takedown of the threat. Colton Grubbs , a 21-year-old man from Kentucky, the developer of the LumunosityLink RAT has pleaded guilty to federal charges of creating, selling and providing technical support for the malware to his customers, who used it to gain unauthorized access to thousands of computers across 78 countries worldwide. First surfaced in April 2015, the LuminosityLink RAT (Remote Access Trojan), also known as Luminosity, was a hacking tool that was sold for $40, marketing itself as a legitimate tool for Wi

Dec 20, 2017
Buying popular plugins with a large user-base and using it for effortless malicious campaigns have become a new trend for bad actors. One such incident happened recently when the renowned developer BestWebSoft sold a popular Captcha WordPress plugin to an undisclosed buyer, who then modified the plugin to download and install a hidden backdoor. In a blog post published on Tuesday, WordFence security firm revealed why WordPress recently kicked a popular Captcha plugin with more than 300,000 active installations out of its official plugin store. While reviewing the source code of the Captcha plugin, WordFence folks found a severe backdoor that could allow the plugin author or attackers to remotely gain administrative access to WordPress websites without requiring any authentication. The plugin was configured to automatically pull an updated "backdoored" version from a remote URL — https[://]simplywordpress[dot]net/captcha/captcha_pro_update.php — after installati

Jan 10, 2017
The Shadow Brokers who previously stole and leaked a portion of the NSA hacking tools and exploits is back with a Bang! The hacking group is now selling another package of hacking tools, " Equation Group Windows Warez ," which includes Windows exploits and antivirus bypass tools, stolen from the NSA-linked hacking unit, The Equation Group. For those unfamiliar with the topic, The Shadow Brokers is a notorious group of black-hat hackers who, in August 2016, leaked exploits, security vulnerabilities, and "powerful espionage tools" created by The Equation Group. On Saturday, the Shadow Brokers posted a message on their ZeroNet based website, announcing the sale of the entire " Windows Warez " collection for 750 Bitcoin (around US$678,630). The data dump contains many windows hacking tools, categorized as following: Fuzzing tools (used to discover errors and security loopholes) Exploit Framework Network Implants Remote Administration Tools (RAT) Remot
Next Page 