December 15, 2017Mohit Kumar
Net neutrality is DEAD —3 out of 5 federal regulators voted Thursday to hand control of the future of the Internet to cable and telecommunication companies, giving them powers to speed up service for websites they favor or slow down others. As proposed this summer, the US Federal Communications Commission (FCC) has rolled back Net Neutrality rules that require Internet Service Providers (ISPs) to treat all services and websites on the Internet equally and prohibit them from blocking sites or charging for higher-quality service. This action repeals the FCC's 2015 Open Internet Order decision taken during the Obama administration. What is Net Neutrality and Why Is It Important? Net Neutrality is simply Internet Freedom—Free, Fast and Open Internet for all. In other words, Net Neutrality is the principle that governs ISPs to give consumers access to all and every content on an equal basis, treating all Internet traffic equally. Today, if there's something that ma 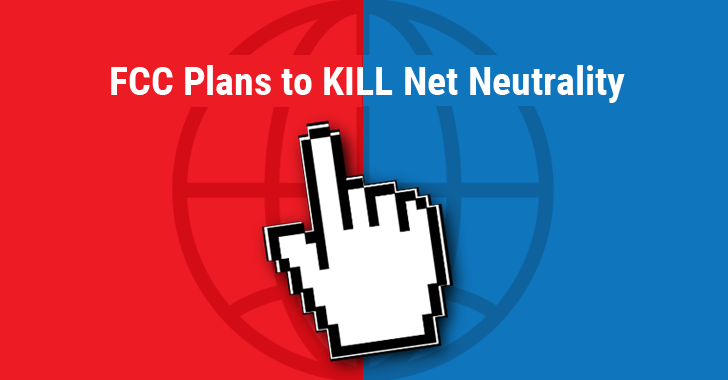 April 27, 2017Mohit Kumar
After crushing a set of privacy rules on ISPs that restrict them from sharing your online data with third parties without your consent, President Donald Trump's newly appointed FCC chairman Ajit Pai has announced the first move in its efforts to kill off Net Neutrality. The US Federal Communications Commission (FCC) has announced that it will roll back net neutrality rules that require Internet service providers (ISPs) to treat all services and websites on the Internet equally. Before moving forward, let's first understand What does Net Neutrality mean? What is Net Neutrality And Why It's Important? Net Neutrality is simply the Internet Freedom — Free, Fast and Open Internet for all. Net Neutrality is the principle that ISPs should give consumers access to all and every contents and application on an equal basis, treating all Internet traffic equally. Today, if there is something that makes everyone across the world 'Equal,' it's the Internet. Equality over

March 24, 2017Mohit Kumar
The ISPs can now sell certain sensitive data like your browsing history without permission, thanks to the US Senate. The US Senate on Wednesday voted, with 50 Republicans for it and 48 Democrats against, to roll back a set of broadband privacy regulations passed by the Federal Communication Commission (FCC) last year when it was under Democratic leadership. In October, the Federal Communications Commission ruled that ISPs would need to get consumers' explicit consent before being allowed to sell their web browsing data to the advertisers or other big data companies. Before the new rules could take effect on March 2, the President Trump's newly appointed FCC chairman Ajit Pai temporarily put a hold on these new privacy rules. Ajit Pai argued that the rules, which are regulated by FTC, unfairly favored companies like Google, Twitter, and Facebook, who have the ability to collect more data than ISPs and thus dominate digital advertising. "All actors in the online
Next Page 