Iranian APT42 Launched Over 30 Espionage Attacks Against Activists and Dissidents 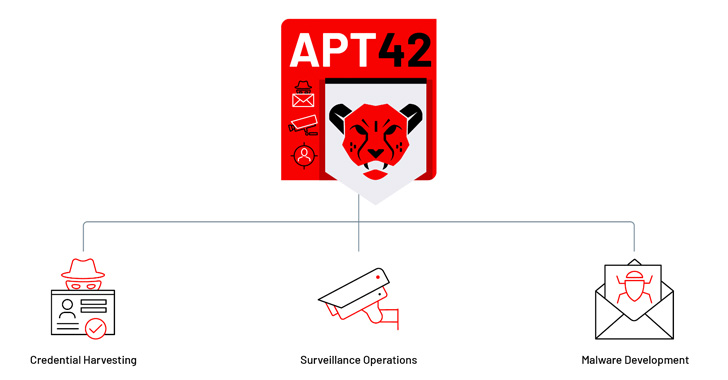 A state-sponsored advanced persistent threat (APT) actor newly christened APT42 (formerly UNC788) has been attributed to over 30 confirmed espionage attacks against individuals and organizations of strategic interest to the Iranian government at least since 2015.

APT42 has exhibited a propensity to strike various industries such as non-profits, education, governments, healthcare, legal, manufacturing, media, and pharmaceuticals spanning at least 14 countries, including in Australia, Europe, the Middle East, and the U.S.

Intrusions aimed at the pharmaceutical sector are also notable for the fact that they commenced at the onset of the COVID-19 pandemic in March 2020, indicating the threat actor's ability to swiftly modify its campaigns in order to meet its operational priorities.

"APT42 uses highly targeted spear-phishing and social engineering techniques designed to build trust and rapport with their victims in order to access their personal or corporate email accounts or to install Android malware on their mobile devices," Mandiant said in a report.

The goal is to exploit the fraudulent trust relationships to steal credentials, enabling the threat actor to leverage the access to conduct follow-on compromises of corporate networks to gather sensitive data and use the breached accounts to phish additional victims.

Attack chains involve a mix of highly targeted spear-phishing messages aimed at individuals and organizations of strategic interest to Iran. They are also conceived with the intent to build trust with former government officials, journalists, policymakers, and the Iranian diaspora abroad in hopes of distributing malware.

Outside of using hacked email accounts associated with think tanks to target researchers and other academic organizations, APT42 is often known to impersonate journalists and other professionals to engage with the victims for several days or even weeks before sending a malicious link. 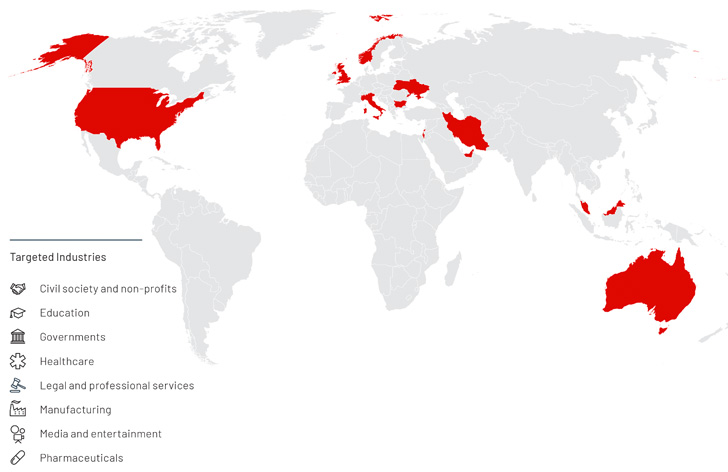 In one attack observed in May 2017, the group targeted members of an Iranian opposition group operating from Europe and North America with email messages that contained links to rogue Google Books pages, which redirected victims to sign-in pages designed to siphon credentials and two-factor authentication codes.

Surveillance operations involve the distribution of Android malware such as VINETHORN and PINEFLOWER via text messages that are capable of recording audio and phone calls, extracting multimedia content and SMSes, and tracking geolocations. A VINETHORN payload spotted between April and October 2021 masqueraded as a VPN app called SaferVPN.

"The use of Android malware to target individuals of interest to the Iranian government provides APT42 with a productive method of obtaining sensitive information on targets, including movement, contacts, and personal information," the researchers noted.

The group is also said to use a raft of lightweight Windows malware from time to time – a PowerShell toehold backdoor named TAMECAT, a VBA-based macro dropper dubbed TABBYCAT, and a reverse shell macro known as VBREVSHELL – to augment their credential harvesting and espionage activities.

APT42's links to APT35 stems from links to an uncategorized threat cluster tracked as UNC2448, which Microsoft (DEV-0270) and Secureworks (Cobalt Mirage) disclosed as a Phosphorus subgroup carrying out ransomware attacks for financial gain using BitLocker.

Mandiant's analysis further lends credence to Microsoft's findings that DEV-0270/UNC2448 is operated by a front company that uses two public aliases, namely Secnerd and Lifeweb, both of which are connected to Najee Technology Hooshmand.

That having said, it's suspected the two adversarial collectives, despite their affiliation with IRGC, originate from disparate missions based on differences in targeting patterns and the tactics employed.

A key point of distinction is that while APT35 is oriented towards long-term, resource-intensive operations targeting different industry verticals in the U.S. and the Middle East, APT42's activities focus on individuals and entities for "domestic politics, foreign policy, and regime stability purposes."

"The group has displayed its ability to rapidly alter its operational focus as Iran's priorities change over time with evolving domestic and geopolitical conditions," the researchers said.