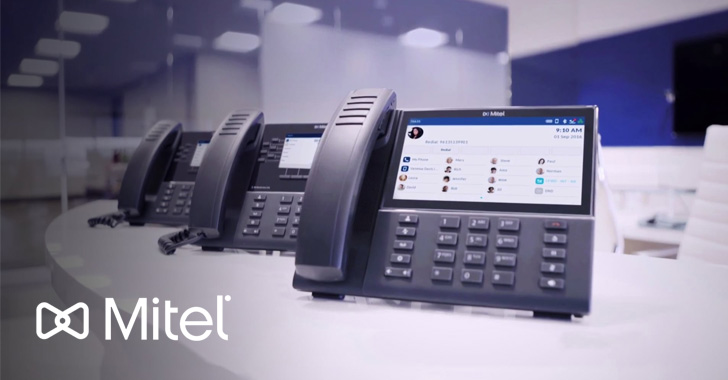 A suspected ransomware intrusion attempt against an unnamed target leveraged a Mitel VoIP appliance as an entry point to achieve remote code execution and gain initial access to the environment.

The findings come from cybersecurity firm CrowdStrike, which traced the source of the attack to a Linux-based Mitel VoIP device sitting on the network perimeter, while also identifying a previously unknown exploit as well as a couple of anti-forensic measures adopted by the actor on the device to erase traces of their actions.

The zero-day exploit in question is tracked as CVE-2022-29499 and was fixed by Mitel in April 2022 by means of a remediation script that it shared with customers. It's rated 9.8 out of 10 for severity on the CVSS vulnerability scoring system, making it a critical shortcoming.

The exploit entailed two HTTP GET requests — which are used to retrieve a specific resource from a server — to trigger remote code execution by fetching rogue commands from the attacker-controlled infrastructure.

In the incident investigated by CrowdStrike, the attacker is said to have used the exploit to create a reverse shell, utilizing it to launch a web shell ("pdf_import.php") on the VoIP appliance and download the open source Chisel proxy tool.

The binary was then executed, but only after renaming it to "memdump" in an attempt to fly under the radar and use the utility as a "reverse proxy to allow the threat actor to pivot further into the environment via the VOIP device." But subsequent detection of the activity halted their progress and prevented them from moving laterally across the network.

The disclosure arrives less than two weeks after German penetration testing firm SySS revealed two flaws in Mitel 6800/6900 desk phones (CVE-2022-29854 and CVE-2022-29855) that, if successfully exploited, could have allowed an attacker to gain root privileges on the devices.

Update: According to security researcher Kevin Beaumont, there are nearly 21,500 publicly accessible Mitel devices online, with the majority located in the U.S., followed by the U.K., Canada, France, and Australia.