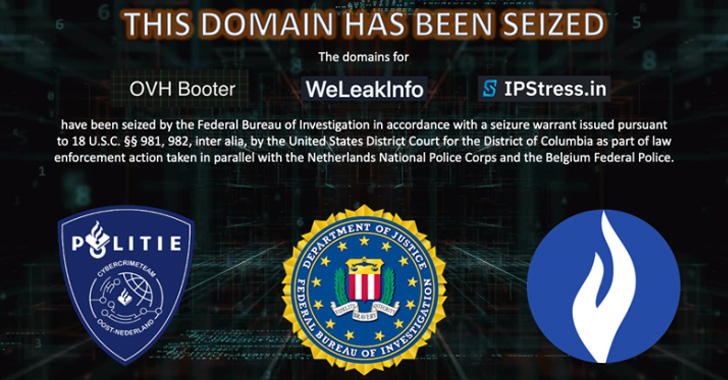 The U.S. Department of Justice (DoJ) on Wednesday announced the seizure of three domains used by cybercriminals to trade stolen personal information and facilitate distributed denial-of-service (DDoS) attacks for hire.

This includes weleakinfo[.]to, ipstress[.]in, and ovh-booter[.]com, the first of which allowed its users to traffic hacked personal data and offered a searchable database containing illegally amassed information obtained from over 10,000 data breaches.

The shutdown of weleakinfo[.]to comes more than two years after a related internet domain named weleakinfo[.]com was confiscated in January 2020, with law enforcement officials arresting 21 individuals in connection to the operation later that year. Last May, one of its operators was sentenced to two years in prison.

The other two domains — ipstress[.]in and ovh-booter[.]com — offered to conduct DDoS services for their clients. DDoS attacks are carried out by flooding a targeted web resource with junk traffic with the goal of rendering it inaccessible to legitimate users of the service.

The "comprehensive law enforcement action" involved the Federal Bureau of Investigation (FBI), the U.S. Attorney's Office for the District of Columbia, and the DoJ's Computer Crime and Intellectual Property Section in coordination with authorities from Belgium and the Netherlands.

"These seizures are prime examples of the ongoing actions the FBI and our international partners are undertaking to disrupt malicious cyber activity," said FBI Special Agent in Charge, Wayne A. Jacobs, said.

"Disrupting malicious DDoS operations and dismantling websites that facilitate the theft and sale of stolen personal information is a priority for the FBI."