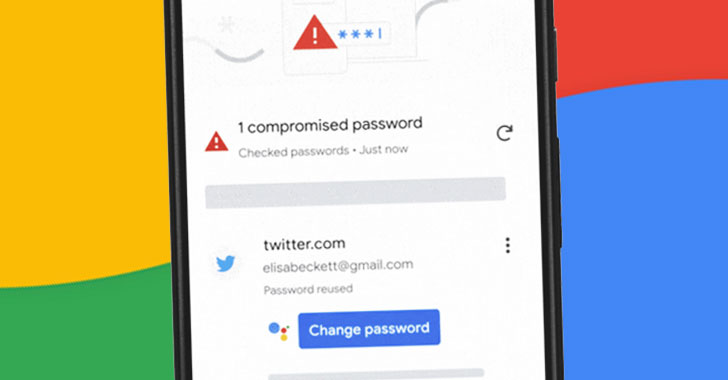 Google on Tuesday announced a new feature to its password manager that could be used to change a stolen password automatically with a single tap.

Automated password changes build on the tool's ability to check the safety of saved passwords. Thus when Chrome finds a password that may have been compromised as part of a data breach, it will prompt users with an alert containing a "Change Password" button, tapping which "Chrome will not only navigate to the site, but also go through the entire process of changing your password."

Enabling this in the background is Google's Duplex technology, which it debuted in 2018 and expanded in 2019 to support various functions in Google Assistant like booking a rental car, ordering food, and buying movie tickets. The search giant, however, noted that users could take over control at any point during the process and change the password manually.

The feature is currently being rolled out in Chrome for Android to all users in the U.S. who have opted to sync their passwords. While only a small number of apps and websites are supported at launch, it's expected to become available on more sites and in more countries in the coming months.

The security change is part of a number of new privacy measures Google announced at its annual Google I/O developer event, including a Privacy Dashboard in Android 12 that offers a pie chart view of permission settings such as location, microphone, and camera, along with information about "what data is being accessed, how often and by which apps."

In addition, Android 12 comes with what's known as Private Compute Core, an open-source component which sandboxes machine learning features like Live Caption, Now Playing, and Smart Reply locally on the device and isolates the sensitive information from being sent and processed in the cloud.

A second important privacy update is a functionality Google calls "app hibernation" that intelligently puts unused apps into a hibernation mode to optimize for device storage, performance, and safety. "Hibernation not only revokes permissions granted previously by the user, but it also force-stops the app and reclaims memory, storage and other temporary resources," Google said.

Taking a leaf out of iOS, Google has added new approximate location permissions in Android, allowing users to limit apps from seeing their precise whereabouts. Another privacy feature inspired from iOS is displaying toast messages when apps attempt to access content from a device's clipboard.

Finally, also coming to Android 12 are iOS-style indicators for microphone and camera use in the notification shade, Quick Settings toggles to disable system-wide access to the camera and mic, and a "quick delete" setting in Search to purge the last 15 minutes of search history with a single tap from the Google Account Menu.