Cybersecurity researchers have uncovered a new, previously undiscovered destructive data-wiping malware that is being used by state-sponsored hackers in the wild to target energy and industrial organizations in the Middle East.

Dubbed ZeroCleare, the data wiper malware has been linked to not one but two Iranian state-sponsored hacking groups—APT34, also known as ITG13 and Oilrig, and Hive0081, also known as xHunt.

A team of researchers at IBM who discovered the ZeroCleare malware says that the new wiper malware shares some high-level similarities with the infamous Shamoon, one of the most destructive malware families known for damaging 30,000 computers at Saudi Arabia's largest oil producer in 2012.

Though EldoS driver is not signed, the malware still manages to run it by loading a vulnerable but signed Oracle's VirtualBox driver, exploiting it to bypass the signature checking mechanism and load the unsigned EldoS driver. 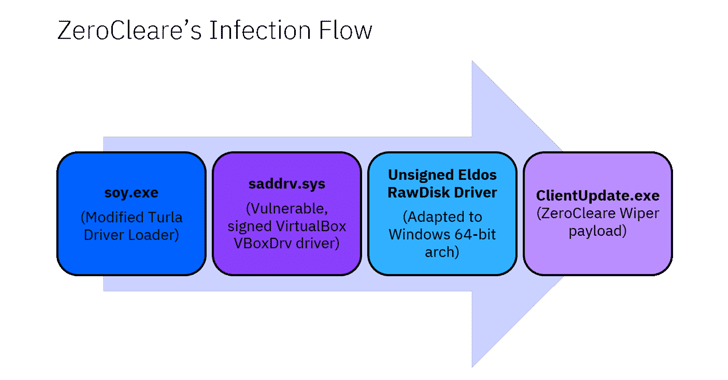 To deploy the Zerocleare malware on as many computers in an organization as possible, attackers' first attempt to brute force network accounts passwords and then install ASPX web shells, like China Chopper and Tunna, by exploiting a SharePoint vulnerability.

"Adding these living-off-the-land tactics to the scheme, ZeroCleare was spread to numerous devices on the affected network, sowing the seeds of a destructive attack that could affect thousands of devices and cause disruption that could take months to recover from fully," the researchers said.

Though researchers haven't disclosed names of any targeted organizations, they did confirm that there are two versions of Zerocleare that have been seen in the wild, one for each Windows architecture (32-bit and 64-bit), but only the 64-bit works.

According to the researchers, the ZeroCleare attacks are not opportunistic and appear to be targeted operations against specific sectors and organizations.

"Looking at the geographical region hit by the ZeroCleare malware, it is not the first time the Middle East has seen destructive attacks target its energy sector."