Mysterious malware that re-installs itself infected over 45,000 Android Phones 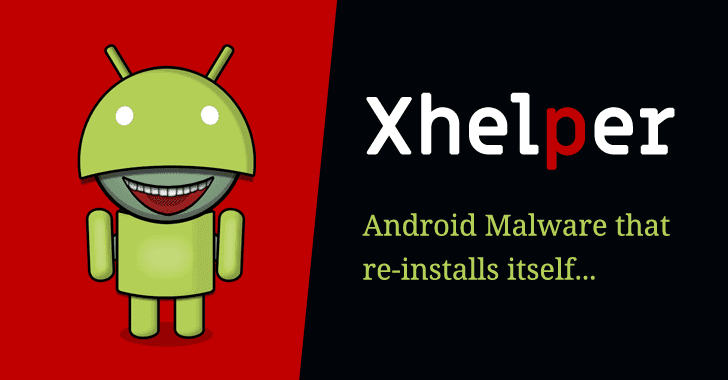 Over the past few months, hundreds of Android users have been complaining online of a new piece of mysterious malware that hides on the infected devices and can reportedly reinstall itself even after users delete it, or factory reset their devices.

Dubbed Xhelper, the malware has already infected more than 45,000 Android devices in just the last six months and is continuing to spread by infecting at least 2,400 devices on an average each month, according to the latest report published today by Symantec.

Here below, I have collected excerpts from some comments that affected users shared on the online forums while asking for how to remove the Xhelper Android malware:

"the 'install apps from unknown sources' setting turns itself on."

"I rebooted my phone and also wiped my phone yet the app xhelper came back."

"Xhelper came pre-installed on the phone from China."

From Where Xhelper Android Malware Comes?


Though the Symantec researchers did not find the exact source from where the malicious app packed with the Xhelper malware comes in the first place, the security firm did suspect that a malicious system app pre-installed on Android devices from certain brands actually downloaded the malware.

"None of the samples we analysed were available on the Google Play Store, and while it is possible that the Xhelper malware is downloaded by users from unknown sources, we believe that may not be the only channel of distribution," Symantec researchers write in its report.


"From our telemetry, we have seen these apps installed more frequently on certain phone brands, which leads us to believe that the attackers may be focusing on specific brands."


In a separate report published two months ago by Malwarebytes, researchers believed that the Xhelper malware is being spread by "web redirects" or "other shady websites" that prompt users to download apps from untrusted third-party sources.

How Does the Xhelper Malware Work?


Once installed, Xhelper doesn't provide a regular user interface; instead, it gets installed as an application component that doesn't show up on the device's application launcher in an attempt to remain hidden from the users.

In order to launch itself, Xhelper relies on some external events triggered by users, like connecting or disconnecting the infected device from a power supply, rebooting a device, or installing or uninstalling an app.

Once launched, the malware connects to its remote command-and-control server over an encrypted channel and downloads additional payloads such as droppers, clickers, and rootkits on the compromised Android devices.

"We believe the pool of malware stored on the C&C server to be vast and varied in functionality, giving the attacker multiple options, including data theft or even complete takeover of the device," the researchers say.


The researchers believe that the source code of Xhelper is still a work in progress, as some of its "older variants included empty classes that were not implemented at the time, but the functionality is now fully enabled."

The Xhelper malware has been seen targeting Android smartphone users primarily in India, the United States, and Russia.

Though many antivirus products for Android detect the Xhelper malware, they are yet not able to permanently remove or block it from getting itself reinstalled on the infected devices.

Since the source of the malware is still unclear, Android users are recommended to take simple but effective precautions like: