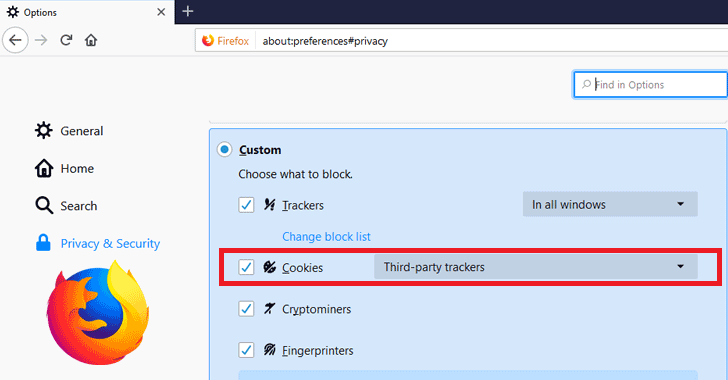 As promised, Mozilla has finally enabled "Enhanced Tracking Protection" feature on its Firefox browser by default, which from now onwards would automatically block all third-party tracking cookies that allow advertisers and websites to track you across the web.

Tracking cookies, also known as third-party cookies, allows advertisers to monitor your online behavior and interests, using which they display relevant advertisements, content, and promotions on the websites you visit.

Which makes sense as no one likes to waste time in watching advertisements and offers that are not of one's interest.

However, since tracking cookies gather way more information without requiring users' explicit permissions and there is no control over how companies would use it, the technique also poses a massive threat to users' online privacy.

To limit this extensive tracking, Mozilla included the "Enhanced Tracking Protection" option as an experimental feature in October last year with the release of Firefox 63 to block known "third-party tracking cookies" compiled by an open-source anti-tracking tool called Disconnect.


From now onwards, the "Enhanced Tracking Protection" setting will come enabled by default for new users who download and install a fresh copy of Firefox, while existing users can either enable the feature manually or wait for Mozilla to activate the feature for all users in the coming months.

"Enhanced Tracking Protection will be practically invisible to you, and you'll only notice that it's operating when you visit a site and see a shield icon in the address bar next to the URL address and the small 'i' icon," Dave Camp, senior VP of Firefox, writes in a blog post.

"When you see the shield icon, you should feel safe that Firefox is blocking thousands of companies from your online activity."

In total, the Enhanced Tracking Protection feature will block known third-party cookies from more than 2,500 tracking domains, though Mozilla has plans to grow that list over time.

Existing Firefox Users Have to Enable It Manually


If you are currently using Firefox, I would recommend you to enable Enhanced Tracking Protection manually, instead of waiting for the company to do that for you.

In order to turn the Enhanced Tracking Protection feature on, just follow the given below steps:


Mozilla is not the only browser maker that is taking more aggressive measures to prevent tracking by ad companies.

Google recently also announced its plans to offer a new mechanism in its Chrome browser that will enable users to block third-party cookies, while keeping some amount of web tracking alive.

However, since Google survives off of targeted ads, Chrome is likely to continue lagging behind Mozilla Firefox and Apple Safari.


Besides Enhanced Tracking Protection, Firefox also rolled out a free, desktop version of its mobile Lockbox password manager, which will be called Firefox Lockwise, making it easier for desktop users to manage their website logins.

Moreover, Mozilla's update also includes an upgrade to its Facebook Container extension for Firefox—which has nearly 2 million downloads—that will prevent embedded Facebook capabilities such as the 'Share' and 'Like' buttons on third-party sites from tracking users.

However, installing Facebook Container on Firefox blocks these buttons and all connections to Facebook's servers, making the company unable to track your visits to these sites.