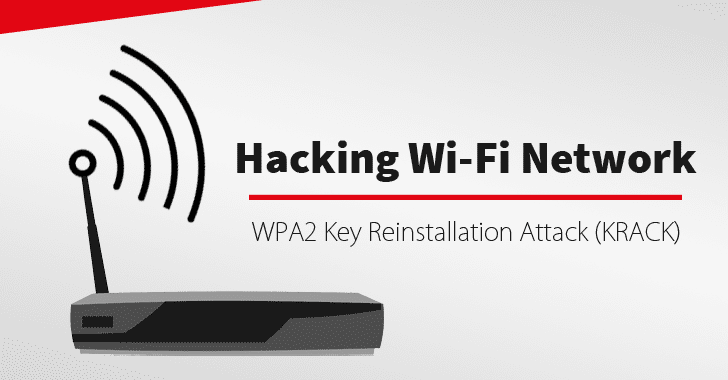 Do you think your wireless network is secure because you're using WPA2 encryption?

Security researchers have discovered several key management vulnerabilities in the core of Wi-Fi Protected Access II (WPA2) protocol that could allow an attacker to hack into your Wi-Fi network and eavesdrop on the Internet communications.

WPA2 is a 13-year-old WiFi authentication scheme widely used to secure WiFi connections, but the standard has been compromised, impacting almost all Wi-Fi devices—including in our homes and businesses, along with the networking companies that build them.

Since the weaknesses reside in the Wi-Fi standard itself, and not in the implementations or any individual product, any correct implementation of WPA2 is likely affected.

According to the researchers, the newly discovered attack works against:


In short, if your device supports WiFi, it is most likely affected. During their initial research, the researchers discovered that Android, Linux, Apple, Windows, OpenBSD, MediaTek, Linksys, and others, are all affected by the KRACK attacks.

It should be noted that the KRACK attack does not help attackers recover the targeted WiFi's password; instead, it allows them to decrypt WiFi users' data without cracking or knowing the actual password.

So merely changing your Wi-Fi network password does not prevent (or mitigate) KRACK attack.

Discovered by researcher Mathy Vanhoef of imec-DistriNet, KU Leuven, the KRACK attack works by exploiting a 4-way handshake of the WPA2 protocol that's used to establish a key for encrypting traffic.

For a successful KRACK attack, an attacker needs to trick a victim into re-installing an already-in-use key, which is achieved by manipulating and replaying cryptographic handshake messages.

"Essentially, to guarantee security, a key should only be installed and used once. Unfortunately, we found this is not guaranteed by the WPA2 protocol. By manipulating cryptographic handshakes, we can abuse this weakness in practice."

The research [PDF], titled Key Reinstallation Attacks: Forcing Nonce Reuse in WPA2, has been published by Mathy Vanhoef of KU Leuven and Frank Piessens of imec-DistriNet, Nitesh Saxena and Maliheh Shirvanian of the University of Alabama at Birmingham, Yong Li of Huawei Technologies, and Sven Schäge of Ruhr-Universität Bochum.

The team has successfully executed the key reinstallation attack against an Android smartphone, showing how an attacker can decrypt all data that the victim transmits over a protected WiFi. You can watch the video demonstration above and download proof-of-concept (PoC) code from Github.


"Decryption of packets is possible because a key reinstallation attack causes the transmit nonces (sometimes also called packet numbers or initialization vectors) to be reset to zero. As a result, the same encryption key is used with nonce values that have already been used in the past," the researcher say.

The researchers say their key reinstallation attack could be exceptionally devastating against Linux and Android 6.0 or higher, because "Android and Linux can be tricked into (re)installing an all-zero encryption key (see below for more info)."

However, there's no need to panic, as you aren't vulnerable to just anyone on the internet because a successful exploitation of KRACK attack requires an attacker to be within physical proximity to the intended WiFi network.

WPA2 Vulnerabilities and their Brief Details


The key management vulnerabilities in the WPA2 protocol discovered by the researchers has been tracked as:


The researchers discovered the vulnerabilities last year, but sent out notifications to several vendors on July 14, along with the United States Computer Emergency Readiness Team (US-CERT), who sent out a broad warning to hundreds of vendors on 28 August 2017.


"The impact of exploiting these vulnerabilities includes decryption, packet replay, TCP connection hijacking, HTTP content injection, and others," the US-CERT warned. "Note that as protocol-level issues, most or all correct implementations of the standard will be affected."

In order to patch these vulnerabilities, you need to wait for the firmware updates from your device vendors.

According to researchers, the communication over HTTPS is secure (but may not be 100 percent secure) and cannot be decrypted using the KRACK attack. So, you are advised to use a secure VPN service—which encrypts all your Internet traffic whether it's HTTPS or HTTP.

You can read more information about these vulnerabilities on the KRACK attack's dedicated website, and the research paper.

The team has also released a script using which you can check whether if your WiFi network is vulnerable to the KRACK attack or not.

We will keep updating the story. Stay Tuned!