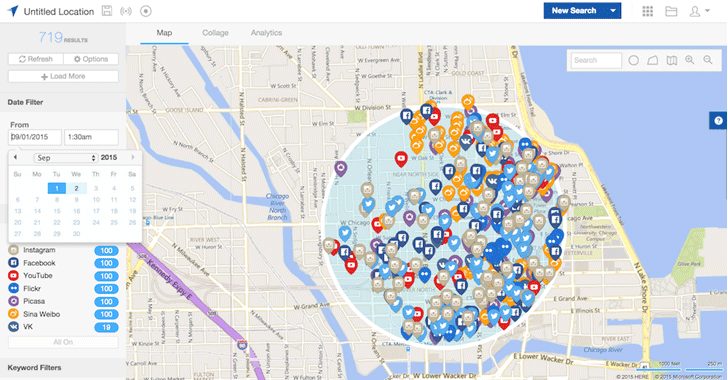 Facebook, Instagram, Twitter, VK, Google's Picasa and Youtube were handing over user data access to a Chicago-based Startup — the developer of a social media monitoring tool — which then sold this data to law enforcement agencies for surveillance purposes, the ACLU disclosed Tuesday.

Geofeedia is a controversial social media monitoring tool that pulls social media feeds via APIs and other means of access and then makes it searchable and accessible to its clients, who can search by location or keyword to quickly find recently posted and publicly available contents.

The company has marketed its services to 500 law enforcement and public safety agencies as a tool to track racial protests in Ferguson, Missouri, involving the 2014 police shooting death of Mike Brown.

With the help of a public records request, the civil rights group found that Geofeedia had entered into agreements with Twitter, Facebook, and Instagram for their users' data, gaining a developer-level access to all three social networks that allowed them to review streams of user content in ways that regular users of the public cannot.

The ACLU is concerned that Geofeedia can "disproportionately impact communities of color" by monitoring activists and their neighborhoods.

Nicole Ozer, technology, and civil liberties policy director for the ACLU of California said: "These special data deals were allowing the police to sneak in through a side door and use these powerful platforms to track protesters."

However, in response to the ACLU report, Geofeedia posted Tuesday an article justifying its commitment to Freedom of Speech and Civil Liberties, releasing the following statement:


"Geofeedia has in place clear policies and guidelines to prevent the inappropriate use of our software; these include protections related to free speech and ensuring that end-users do not seek to inappropriately identify individuals based on race, ethnicity, religious, sexual orientation or political beliefs, among other factors."