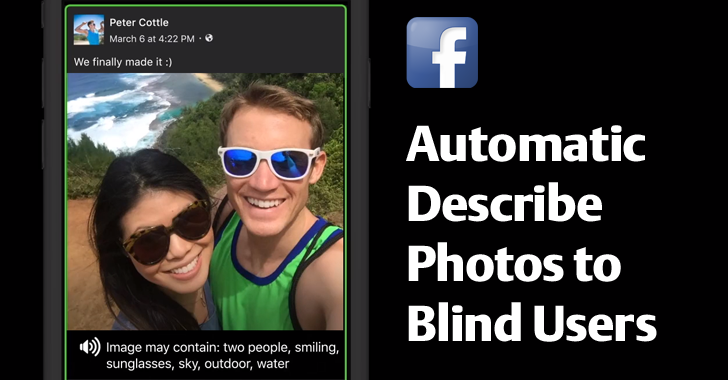 Today the Internet has become dominated by images, and it's the major feature that got Facebook to a Billion daily users.

But not now! Facebook has launched a system, dubbed Automatic Alternative Text, which describes the contents of pictures by telling blind and visually-impaired users what appears in them.

Blind and visually-impaired people use sophisticated navigation software known as screen readers to make their computers usable. The software turns the contents of the screen into speech, but it can't "read" pictures.

However, Facebook's Automatic Alternative Text or AAT uses object recognition technology that can decode and describe photos uploaded to the social network site using artificial intelligence and then provide them in a form that can be readable by a screen reader.


ATT tool, led by Facebook's 5-year-old accessibility team, has already made its way to iOS devices and would soon be available for Android and the Web as well.

Facebook says its AAT tool The more images it scans, the more sophisticated the software will become. While still in its early stages, the AAT technology can reliably identify objects and activities in categories including:
The move by the social network giant is a bigger step forward for blind and visually-impaired users, although it only works in English at the current.

So in order to see the AAT technology in action for yourself, iOS users using iOS's built-in screen reader can Go to Settings → General → Accessibility, and activate VoiceOver.

The company will soon bring the new functionality to other mobile platforms as well as languages. You can see the video demonstration to know how AAT tool works for someone using a screen reader.