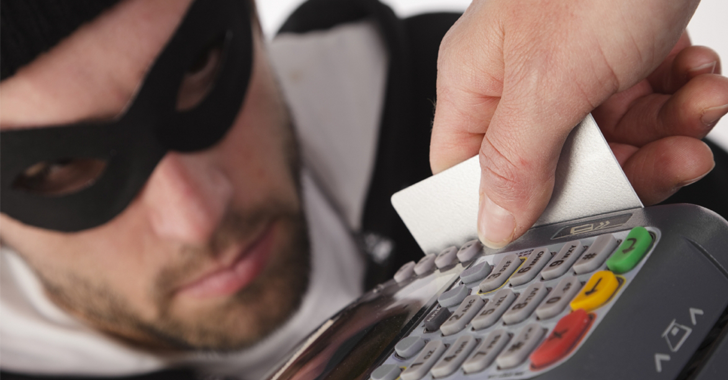 Card Skimmers have been around for years, but the video posted below is a perfect example of the evolution of the technology used by thieves.

The video released by Miami Beach Police involved two men who work as a team to install a credit card Skimmer on top of a card terminal at a local gas station in LESS THAN 3 SECONDS.

Yes, in just less than 3 seconds hackers can turn a regular credit and debit card reader into a Skimmer – a device designed to secretly steal a victim's credit or debit card information.

The two men were caught on video by a security camera, but it all happened so fast that one might have to rewatch the video to actually catch the crime.

Miami Beach Police have published the video of the cyber crook and his partner, who was tasked with distracting the station's clerk, in the hopes that someone recognizes the criminals and helps track them down.

The incident took place on Wednesday at around 9:30 PM at the gas station located at Chevron at 1453 Alton Road.

The two men entered the gas station store and approached the station's clerk to buy some items.

When one crook got busy distracting the clerk by paying for items and asking other items from nearby shelves, the other pulled a skimming device (in the form of the card terminal shape) from his bag and placed it on top of the payment card terminal in a matter of seconds.

Once placed, both the crooks casually walked out of the store.

Why Skimmers Are Dangerous Threat


Whenever customers swipe their credit cards on that terminal, the skimmer will record and store the card details in it. Later, either the two men will return and simply collect the skimmer, or they will use a Bluetooth device to transfer the collected data.

With the recorded payment card data, the crooks can clone credit and debit cards of affected victims, or use the stolen data to make online purchases.

Though the good news is that by the second day, the card skimmer moved slightly from its intended position and the station's clerk noticed it and called the police afterward.

The skimming device was then removed, giving the crooks no chance to affect more gas station's customers.

Since it takes just 2-3 seconds to install the skimmer, the crooks might have installed hundreds or thousands of such skimming devices to collect credit card details on hundreds of thousands of people, or even more.

So, you are advised to beware when swiping your cards on payment terminals. Moreover, if you notice any unusual payment or charge you do not recognize on your account statement, contact your bank as soon as possible.