From Today Onwards, Don't You Even Dare to Use Microsoft Internet Explorer 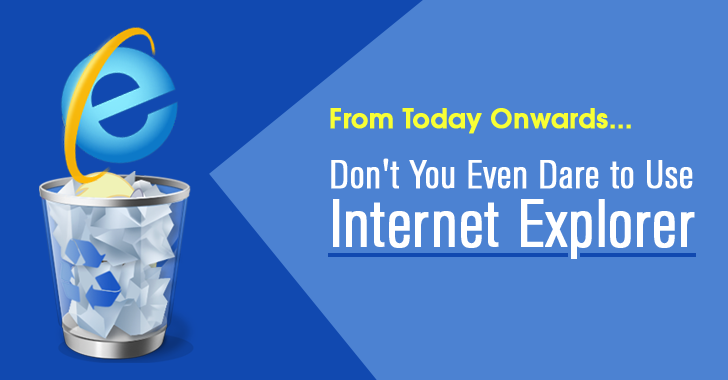 Yes, from today, Microsoft is ending the support for versions 8, 9 and 10 of its home-built browser Internet Explorer, thereby encouraging Windows users to switch on to Internet Explorer version 11 or its newest Edge browser.

Microsoft is going to release one last patch update for IE8, IE9 and IE10 today, but this time along with an "End of Life" notice, meaning Microsoft will no longer support the older versions.

So, if you want to receive continuous updates for your web browser and avoid being exposed to potential security risks after 12 January, you are advised to upgrade your browser to Internet Explorer 11, or its new Edge browser.

"Internet Explorer 11 is the last version of Internet Explorer, and will continue to receive security updates, compatibility fixes, and technical support on Windows 7, Windows 8.1, and Windows 10," Microsoft says.

This move could be part of Microsoft's bigger plan to move its users to the new Edge browser, which is currently available only on Windows 10 PCs.

With the launch of Microsoft Edge last April, the company attempted to encourage Windows 10 users to switch to Edge if they are using its rival browser, such as Google Chrome or Mozilla Firefox, as the default web browser.

Edge has been designed completely separate to Internet Explorer, and promises speed and usability, with support for Cortana -- Microsoft's virtual assistant.

For higher adoption of Edge, Microsoft is finally ending support for Internet Explorer 8, 9 and 10. However, an estimated 340 Million Windows users are still running Internet Explorer, and nearly half of those are believed to be using one of the expired IE versions.

Therefore, the older versions of the browser will receive KB3123303 patch today that will feature "nag box" asking users to upgrade their browser.