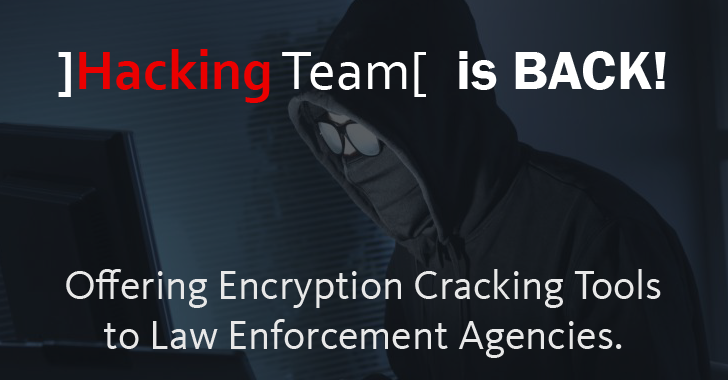 Hacking Team, the infamous Italy-based spyware company that had more than 400 GB of its confidential information stolen earlier this year, has resumed its operations and started pitching new hacking tools to help US law enforcement gets around their encryption issues.

Yes, Hacking Team is back with a new set of Encryption Cracking Tools for government agencies as well as other customers to break encrypted communications.

The e-mail is not made public, but Motherboard has been able to obtain a copy of it that states:

"Most [government agencies] in the United States and abroad will become 'blind,' they will 'go dark,' they will simply be unable to fight vicious phenomena such as terrorism," wrote Vincenzetti. "Only the private companies can help here; we are one of them."
"It is crystal clear that the present American administration does not have the stomach to oppose the American IT conglomerates and to approve unpopularly, yet totally necessary, regulations," He added.

The brand new cyber investigation solutions here, of which Vincenzetti is talking about, will be "Game Changers."

The announcement came roughly 4 months after a mysterious hacker or group of hackers hacked into Hacking Team's servers, leaking more than 400 gigabytes of internal data, including:

Since then, Hacking Team has reportedly been working on launching a new revamped 10th edition of its proprietary Remote Control System, RCS 10.

Hacking Team is known for its Remote Control System (RCS) spyware, also known as Galileo, which is loaded with a number of zero-day exploits that have the ability to monitor the computers of its targets remotely.

However, it's still unclear when the company will actually release RCS 10. Also, it is all set to be seen as to which law enforcement agencies will take the Hacking Team offer, given its recent security breach.