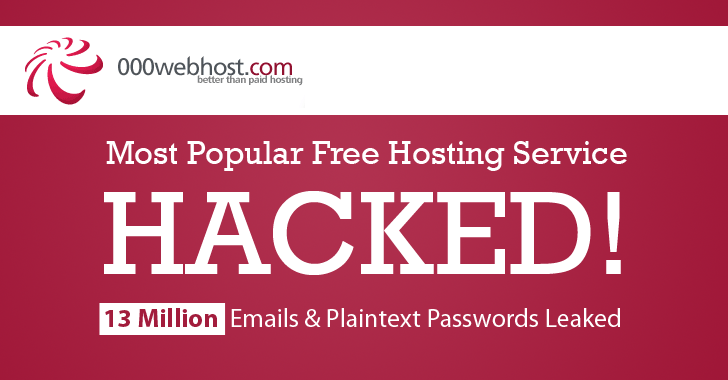 According to a recent report published by Forbes, the Free Hosting service provider 000Webhost was hacked in March 2015 by an anonymous hacker.

In a post on its official Facebook page, the hosting company has acknowledged the data breach and posted the following statement:

"We have witnessed a database breach on our main server. A hacker used an exploit in old PHP version to upload some files, gaining access to our systems. Although the whole database has been compromised, we are mostly concerned about the leaked client information."

The stolen data was obtained by Troy Hunt, an Australian security researcher, who received the data from an anonymous source and also confirmed the authenticity of the data.

"By now there's no remaining doubt that the breach is legitimate and that impacted users will have to know," Hunt wrote in a blog post published Wednesday. "I'd prefer that 000webhost be the ones to notify [its customer] though."

000Webhost web Hosting company repeatedly failed to pay attention to the early warnings by Troy Hunt and the Forbes journalist, but the company ultimately decided to ignore them.

The Web Hosting company did not even follow fundamental and standard security practices to ensure the security of its customers.

Data breaches are common these days. Just a few days back, we reported about a serious data breach at TalkTalk – the biggest phone and broadband provider in the UK that put the personal data of its 4 Million customers at risk.

But, What could a Security Breach lead to?
Note: At the time of writing, 000webhost.com website is temporarily down.

For security reasons, the team at Free Hosting service has changed all customers' passwords to the random values and implemented encryption, without giving any direct notice to its affected customers.

However, 000Webhost said: "We removed all illegally uploaded pages as soon as we became aware of the [data] breach. Next, we changed all the passwords and increased their encryption to avoid such mishaps in the future."

Shall I clap for that?