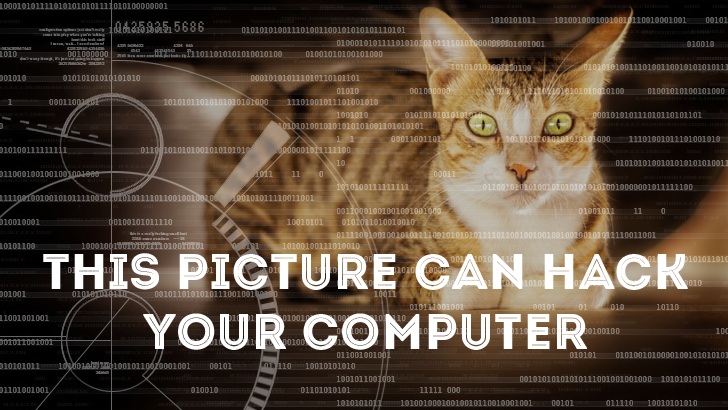 Next time when someone sends you a photo of a cute cat or a hot chick than be careful before you click on the image to view — it might hack your machine.

Yes, the normal looking images could hack your computers — thanks to a technique discovered by security researcher Saumil Shah from India.

Dubbed "Stegosploit," the technique lets hackers hide malicious code inside the pixels of an image, hiding a malware exploit in plain sight to infect target victims.

Just look at the image and you are HACKED!

Shah demonstrated the technique during a talk titled, "Stegosploit: Hacking With Pictures," he gave on Thursday at the Amsterdam hacking conference Hack In The Box.

According to Shah, "a good exploit is one that is delivered in style."

Keeping this in mind, Shah discovered a way to hide malicious code directly into an image, rather than hiding it in email attachments, PDFs or other types of files that are typically used to deliver and spread malicious exploits.

To do so, Shah used Steganography — a technique of hiding messages and contents within a digital graphic image, making the messages impossible to spot with the naked eye.

Here's How to Hack digital pictures to send malicious exploits:

Until now Steganography is used to communicate secretly with each other by disguising a message in a way that anyone intercepting the communication will not realise it's true purpose.

However in this case, instead of secret messages, the malicious code or exploit is encoded inside the image's pixels, which is then decoded using an HTML 5 Canvas element that allows for dynamic, scriptable rendering of images.

The "Secret Sauce" behind Stegosploit — this is what Shah calls it.

The malicious code, dubbed IMAJS, is a combination of both image code as well as JavaScript hidden into a JPG or PNG image file. Shah hides the malicious code within the image's pixels, and unless somebody zoom a lot into it, the image looks just fine from the outside.

Shah demonstrated to Lorenzo Franceschi of Motherboard exactly how his hack works. He used Franceschi's profile picture and then prepared a demonstration video using his picture as the scapegoat.

In the first video presentation, Shah shows a step by step process on how it is possible to hide malicious code inside an image file using steganography technique. You can watch the video given below:

In the second video, Shah shows how his Stegosploit actually works. His exploit works only when the target opens the image file on his or her web browser and clicks on the picture.

Once the image is clicked, the system's CPU shoots up to 100 percent usage, which indicates the exploit successfully worked. The malicious code IMAJS then sends the target machine's data back to the attacker, thereby creating a text file on the target computer that says — "You are hacked!"

Shah also has programmed his malicious image to do more stealthy tasks, like downloading and installing spyware on victim's machine, as well as stealing sensitive data out of the victim's computer.

The bottom line here is:

You should not presume the image files as "innocent" anymore, as they can hide malicious code deep inside its pixels that could infect your computers.

Therefore, always make sure before you click on one.

Shah has been working on the research [PDF] during his spare time for almost five years, but he has not tested his technique on popular image sharing websites like Dropbox or Imgur. He also admitted that his method might not work everywhere.