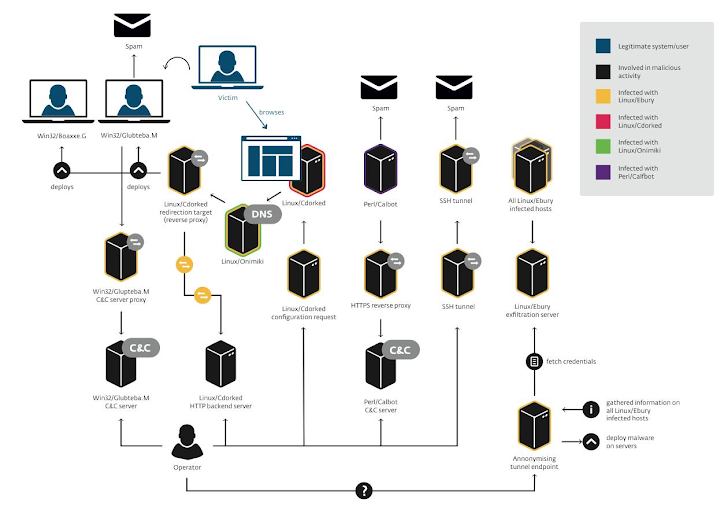 In late 2013, Security Researchers identified thousands of Linux systems around the world infected with the OpenSSH backdoor trojan and credential stealer named Linux/Ebury, that allows unauthorized access of an affected computer to the remote attackers.

Antivirus Firm ESET's Reseacher team has been tracking and investigating the operation behind Linux/Ebury and today team uncovers the details [Report PDF] of a massive, sophisticated and organized malware campaign called 'Operation Windigo', infected more than 500,000 computers and 25,000 dedicated servers.

'We discovered an infrastructure used for malicious activities that is all hosted on compromised servers. We were also able to find a link between different malware components such as Linux/Cdorked, Perl/Calfbot and Win32/Glupteba.M and realized they are all operated by the same group.' ESET reported.

Malware used in Operation Windigo:
The Group behind the attacks may have been active since December 2012, using a modified version of OpenSSH, an open source alternative to proprietary Secure Shell Software (SSH) to infect thousands of servers and desktop computers, apparently, stole user credentials on system and SSH private keys for outgoing SSH connections.

"According to our analysis, over 25,000 servers have been affected over the last two years. More than 10,000 of them are still infected today." ESET reported, "using the Linux/Ebury OpenSSH backdoor"

ESET Researchers collaborated with CERT-Bund, the European Organization for Nuclear Research (CERN), the Swedish National Infrastructure for Computing and other agencies to fight against this malware campaign.

How to Check, if you have been compromised? If you use only 'ssh -G' command, a clean server will print: 'ssh: illegal option -- G', but an infected server will only print the usage.

Administrators can use the following UNIX/Linux command to check:

If your system or server was also compromised in the same campaign, it's recommended to re-install the system or re-set all passwords and private OpenSSH keys.