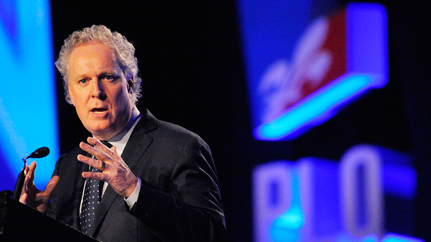 Two provincial government websites as well as Quebec Liberal Party and Education Ministry websites went down early Saturday morning and remained inaccessible for most of the day. No one has claimed responsibility for the downed sites but Twitter was full of rumours on Saturday pointing to Anonymous, the loose group of cyber activists.

The cyber troubles began just hours after a new law, Bill 78, passed in the National Assembly. It requires any group of 50 or more people holding a demonstration in the province to inform police eight hours in advance of their planned route and other pertinent details such as the start and end times. One of Anonymous' Twitter accounts tweeted on Friday: "Quebec Considers Draconian Anti-Protest Law ... Expect us."
Anonymous also threatened the website belonging to the province's National Assembly. While some reported that the legislature's website had been taken offline, it was functioning as of 9:25 a.m. on Saturday. Referring to the province as "Quebecistan," the group wrote that "Rule 78 must die."
A spokesman for the Quebec Liberal Party said the party's site was hacked."They are attacks that are pretty common," said Michel Rochette. "We have been victims of cyber-attacks for the past few weeks."
[Source]