Another DDOS tool from Anonymous - HOIC

A new DDoS tool from Anonymous called high-orbit ion canon or HOIC come into light. Attackers are constantly changing their tactics and tools in response to defender's actions. HOIC is an Windows executable file. Once started, you will be presented with the following GUI screen. If the attacker clicks on the + sign under TARGETS they get another pop-up box where you can specify target data. 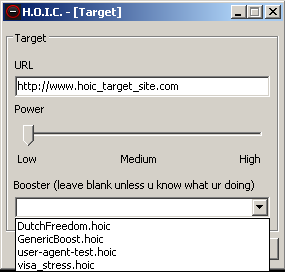 The attacker can then specify the following Target data. After the attacker clicks on the Add button, they are taken back to the main screen. The attacker can then adjust the THREADS number if desired to further increase the strength of the attack. When they are ready to lauch the attack, they click on the "FIRE TEH LAZER!" button.
LOIC had both TCP and UDP DDoS attacks in addition to HTTP attacks were as HOIC is strictly an HTTP DoS tool. The real difference, or enhancement, that HOIC has over LOIC is its use of what it calls "Booster Scripts." While the HOIC requests try to evade detection through randomization techniques, there are still some request attributes which can be used for identification of attack traffic. Most of these tell-tale signs are based on abnormalities vs. real web web browsers.